In January, IMI recorded 19 cases of violations of freedom of speech in Ukraine

In January, the IMI experts recorded in total 19 cases of violations of free speech in Ukraine. Of these, 11 were the cases involving physical aggression against journalists. These are the monthly monitoring data of the Institute of Mass Information "Freedom of Speech Barometer".

Most violations were identified in the category “obstruction to professional journalistic activity”: 6 cases. 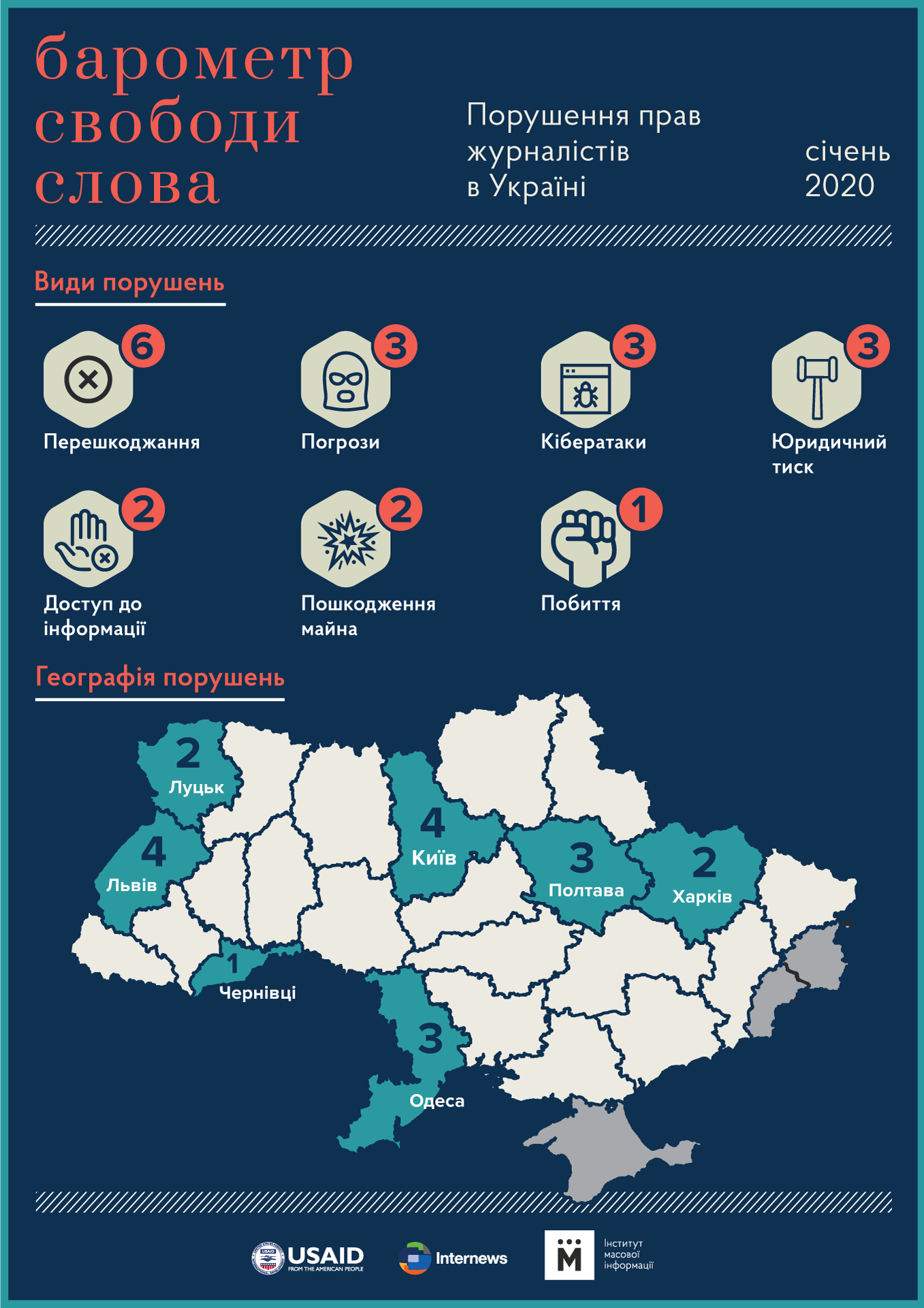 “Last month, we have seen a rather strong “anti-journalistic activity”. Breakers rapidly stormed into the reality just after the new year holidays. Usually, IMI revales a small number of violations in January - within 10-15 cases. According to our monitoring reports, journalists frequently are facing not only physical aggression, but also are found out to be victims of cyber-attacks and legal pressure, as it has been evidenced by the January monitoring of freedom of speech condition in Ukraine, ” expert with IMI Kateryna Dyachuk said.

The most high profile violations in January were incidents involving the arson of a journalist from Radio Svoboda in Lviv and attempts by cyber police to persuade editors of regional Internet editions to install a software script on their sites that would allow users to be identified.

The right of journalists to exert profession was violated mainly by individuals, local authorities, law enforcement and the President's Office.

In the case of arson, one could remark immediate response of the National Police investigators, who promptly identified the arsonist of the journalist's car and pressed charges against him.

In addition, IMI recorded one case of assault against cameraman with STB TV channel Oleksandr Brynza, who got injuries as a result of using unknown gas during a rally near Kharkiv Regional State Administration.

In the Crimea annexed by Russia, the FSB banned entry in Russia and Crimea for Ukrainian journalist Taras Ibrahimov, who cooperates with the Crym.Realii (RFE/RL), till the end of May 2054. The journalist relates this measure to his journalistic activity and his publications covering the trials of Crimean Tatars in Crimea and Russia.

Thus, since the beginning of the year, IMI has recorded 6 cases of obstruction, 3 cases of threats, cyber attacks and legal pressure, 2 cases of restriction of access and 1 case of beating.

The Institute of Mass Ingformation conducts a monthly nationwide monitoring of freedom of speech by following categories: physical aggression, censorship and access to information, economic and political pressure, legal pressure and cybercrime against the media and journalists. The monthly report includes only cases related to freedom of expression and professional journalism. You can read more about the methodology here .