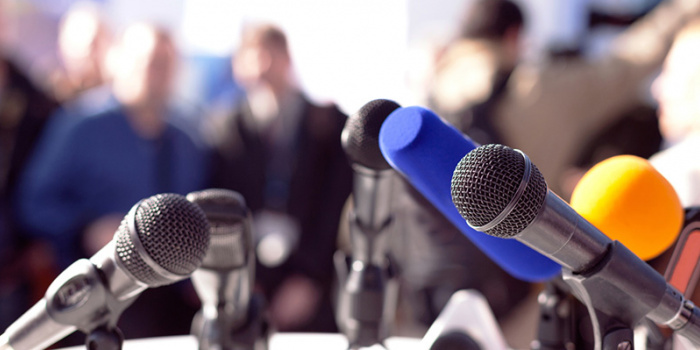 The Institute of Mass Information considered that by denying access for some media outlets to the meeting with President Volodymyr Zelensky in the Kherson region, authorities were making obstruction to journalistic activity.

Kateryna Dyachuk, head of the IMI Freedom of Speech Monitoring Department told it interviewed by Bukva.

The expert noted that the government should not divide the media into loyal and disloyal.

"Because loyal journalists, we all understand it, are those journalists who will not cover all the positions of the parties without bias and will make a kind of" warm bath "for the government. Among other things, this is now being done for Mr. Zelensky, ” Kateryna Dyachuk said.

She added that lately, restrictions for journalists were regularly seen during Zelensky's outgoing missions.

“We see such a tendency that some mass media are facing some restrictions during working visits and this is justified by quarantine restrictions. For example, we recorded such an incident in early June in Khmelnytsky region, when journalists also complained that they were not allowed to cover Mr. Zelensky's working visit. Now, we have such an incident in Kherson. And actually, the journalists launched such a flash mob when they come out with blank pages, this is to reflect the self-regulation of the media community in the regions and this attracts attention and brings this issue to the national level, because we see that this flash mob went beyond the borders of Kherson region ", - the representative of IMI noted.

She also stressed that accreditation should not be a condition for admitting or not admitting a journalist to the events held by the authorities.

As for accreditation, we know that there is Article 26 in the Law on Information and it clearly define that, even if there is the case of accreditation, it should not be a condition for admitting or not admitting a journalist to activities carried out by the authorities. So, in this situation that happened today in Kherson, we can see signs of obstruction to the professional activity of journalists, ”she explained.

According to Dyachuk, IMI has noticed a tendency for the Office of the President to impose restrictions on journalists, and to justify it with quarantine restrictions.

“At the same time, if a local authority makes accreditation lists, it must have documents that spell such restrictions they refer to. For example, the resolution of the Cabinet of ministers. <…> Such secrecy of power is observed in our country, and under quarantine this tendency has been intensified. "At some points, this is very 'сlever' to use some quarantine restrictions to deny access for some journalists whom the authorities don’t like," she added.

As IMI reported, on June 26, journalists from Kherson, who were not accredited to meet with President Volodymyr Zelensky, went on strike. Several online publications published blank pages.

On May 27, at the request of the IMI, the Office of the President replied that the list of accredited media at the press conference of the President Volodymyr Zelensky, held on May 20, was formed based on the principle of popularity of mass media. At the same time, the OP did not specify which ratings they took as a basis to select such mass media.