Georgian media called on diplomats to respond to violence against journalists 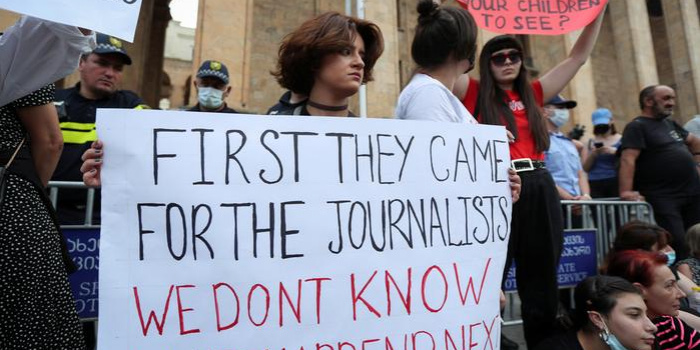 In Georgia, after death of cameraman Lekso Lashkarava, mass media issued a joint statement saying that cases of violations of journalists' rights were "approaching a boiling point," as Kanal 24 reported.

"Dozens of cases targeting mass media have not yet been investigated. The authorities do not guarantee the protection of journalists' safety, and statements by members of the ruling party are even more inspiring to violence," as to the statement appealing to diplomatic corps and international organizations.

The media reminded that on July 5, according to the Ministry of Internal Affairs of Georgia, 53 journalists were injured, including the operator of Pirveli TV company Lekso Lashkarava. Some media representatives are still in hospital.

At the same time, the statement said, members of various violent groups still openly threaten journalists and cameramen. And law enforcement officers, they say in the statement, do not react to it properly.

"We call on the representatives of the diplomatic corps and international organizations accredited in Georgia to provide an immediate and effective response to the targeted harassment of media representatives in Rustaveli Avenue on July 5," the Georgian media said in a statement.

The statement was signed by more than 70 media editions working in Georgia.

A protest took place in Tbilisi on July 11, demanding the resignation of the Georgian government led by Irakli Garibashvili by the morning of June 12.

As IMI reported, on July 11, it became known that the cameraman Lekso Lashkarava had died in Tbilisi.