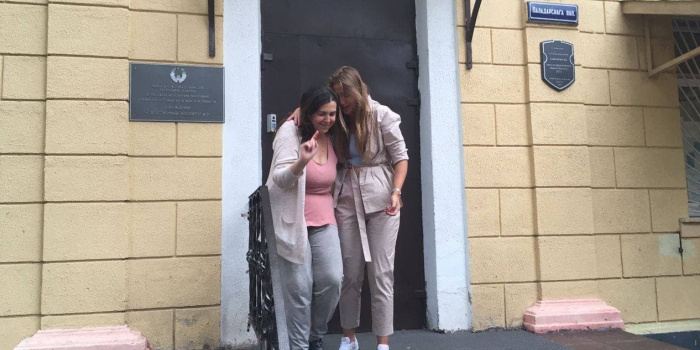 In accordance with the Criminal Code of Belarus, a person who "voluntarily reimbursed the damages, paid off the revenue obtained by crime” can be exonerated from criminal liability.

On January 6, relatives of the detainees transferred 110,000 Belarusian rubles (around $43 000) to the Investigative Committee’s account as "compensation for damage."

Former journalist of the state propaganda TV channel BT Ksenia Lutskina remains the only participant in the case of the Press Club. She remains in custody.

According to Nasha Niva, she was offered to write a plea for mercy, but she refused.

Ksenia Lutskina worked for 15 years on state television. She resigned after the 2020 election and was about to create an alternative channel, when she was detained. The journalist was accused of tax evasion. She has a young son, her parents are worried about her daughter's health.

Also another person who is charged in the "case of the Press Club", remains in the pre-trial detention center №1 on Volodarsky: the cameraman with "Belarus-1" Denis Sokolovsky. His daughter Vasilina told  Zerkalo.io about this.

At the same time, Belarusian lawyer Serhiy Zikratsky, who is Svitlana Tikhanovska's legal representative, noted that from a legal point of view, the actions of the Belarusian authorities remain illegal.

“Based on the first reports, the employees of the Press Club were "pardoned". So, what happened yesterday is illegal. According to Article 96 of the Criminal Code, pardon is granted to a person convicted for a crime. None of those who were released from the pre-trial detention center yesterday have not been convicted, ” as Serhiy Zikratskyi said.

Searches took place within the criminal case under Art. 243 part 2 (“Tax evasion in a particularly large amount”). After searches, the detainees were taken for questioning to the Department of Financial Investigations of the State Control Committee of Belarus.

Slutskaya is suspected of tax evasion in a particularly large amount, Sharko, Olshevsky, Slutsky are suspected of complicity.

Belarusian human rights activists have recognized the detained employees of the Press Club as political prisoners.