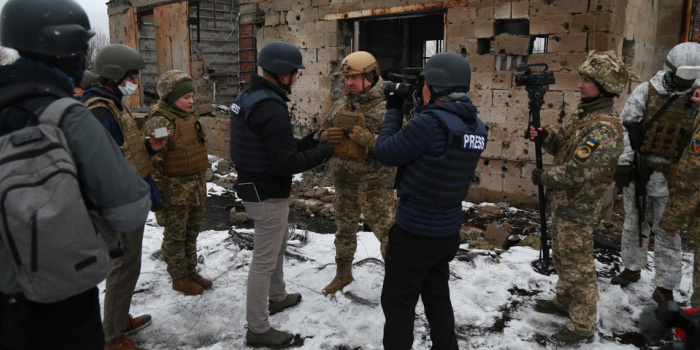 Ministry of Defense of Ukraine

All hindrances in the procedure of admission of foreign media to the ​​Joint Forces Operation area have been removed, as the General Staff of the Armed Forces of Ukraine during the round table "Specificities of accreditation for journalists in JFO area", as Ukrinform reported.

The issue was that foreign journalists sometimes had to wait for several months to get accreditation and some of them finally were denied.

A simplified accreditation procedure has been launched on February 20 and all hindrances in the procedure for foreign media have been removed, according to Oleksander Motuzyanyk, head of the expert group of the Directorate of Information Policy for Defense and Strategic Communications of the Ministry of Defense of Ukraine.

According to him, the number of denials of accreditation to foreign journalists is less than one percent, and if a journalist is denied accreditation, the media may send another journalist.

According to Artem Dekhtyarenko, a spokesman for the Security Service of Ukraine, actually, there was any not-treated application for accreditation from foreign journalists.

“Our colleagues from the Armed Forces of Ukraine inform journalists about the refusals. The reasons of the SBU are of a recommendatory nature, and we cannot disclose them. We have a whole range of verifications of journalists for their publications, illegal border crossing, interaction with terrorist organizations and more. But the position of the Security Service of Ukraine is always well-argued and well-founded, ”as Dekhtyarenko said.

According to the participants of the round table, in two months of this year more than 1,000 requests for accreditation of foreign journalists in the environmental protection zone have been processed, compared to the same figures for the whole year last year. Increased interest in the Western media is due to the aggravation of the situation in eastern Ukraine.

As IMI reported earlier, the General Staff of the Armed Forces of Ukraine promised to accelerate the accreditation of foreign journalists who were going to work in the Joint Forces Operation area. This decision was adopted by the General Staff on February 20.

Earlier, the editor-in-chief of Censor.net, Yuriy Butusov, reported on blocking the access for foreign journalists to Donbass.

“About 400 journalists of the world's leading media are currently unable to obtain accreditation for access to the front in the JFO area. As a result, only 25 foreign journalists were allowed to cover the shelling of a kindergarten and school in Donbas, ”he said.

As IMI reported, on February 8, Media Movement declared  that foreign journalists were encountering problems to be accredited in JFO area.

Minister of Culture Oleksander Tkachenko  found that foreign media were legitimizing terrorism, as they cited pro-Russian militants. The minister made such a statement after Reuters had published an interview with pro-Russian rebels leader of so-calleed DPR Denys Pushilin on 7 February.