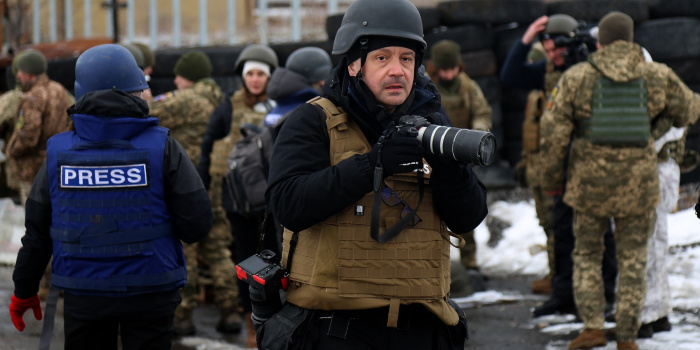 The General Staff of the Armed Forces of Ukraine will accelerate the accreditation of foreign journalists who are going to work in the Joint Forces Operation area.

This decision was adopted by the General Staff on February 20, as Censor.net reported.

“Thanks to joint work with the Ministry of Foreign Affairs, the Commander-in-Chief of the Armed Forces of Ukraine Valery Zaluzhny decided to speed up the accreditation for foreign journalists aiming to work in the JFO area up to 48 hours if they previously submitted the required set of documents to the press center of the Joint Forces Operation. The press center of the JFO is willing to quickly resolve all issues and the procedure of processing all requests from journalists for accreditation. Since today (February 20, ed. ), all impediments to the admission of leading foreign media are being removed, ”the General Staff said in a comment to the publication.

The General Staff noted that all issues would be promptly resolved in case of ny delay while registering journalists' permits to the JFO area.

At the same time, the General Staff emphasized that the conditions for submitting documents to the press center of the JFO, restrictions on state secrets and security measures during the work of journalists remained in force.

"The Armed Forces of Ukraine hold in respect the journalists’ work and will do everything necessary for their effective work and coverage of Russian aggression in the Donbas and Crimea," the statement said.

Earlier, the editor-in-chief of Censor.net, Yuriy Butusov, reported on blocking the access for foreign journalists to Donbass.

“About 400 journalists of the world's leading media are currently unable to obtain accreditation for access to the front in the JFO area. As a result, only 25 foreign journalists were allowed to cover the shelling of a kindergarten and school in Donbas, ”he said.

According to him, one of the largest German TV channels ZDF could not get access to cover the developments at the front.

As IMI reported, on February 8, Media Movement declared  that foreign journalists were encountering problems to be accredited in JFO area.

Minister of Culture Oleksander Tkachenko  found that foreign media were legitimizing terrorism, as they cited pro-Russian militants. The minister made such a statement after Reuters had published an interview with pro-Russian rebels leader of so-calleed DPR Denys Pushilin on 7 February.