Everybody has their own story: from taser torture to attempted execution – journalist about the people in liberated Makiyivka 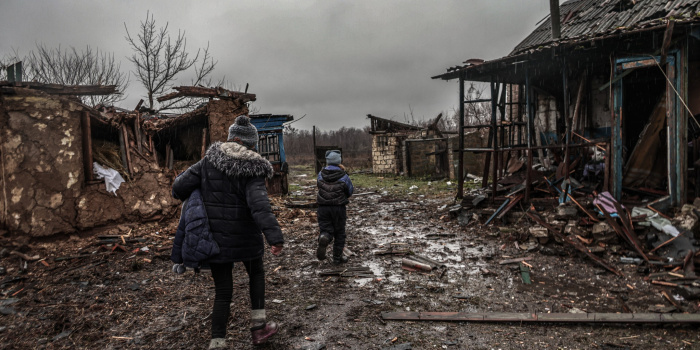 "Rado Liberty" correspondent Maryan Kushnir was the first journalist who managed to get to the liberated Makiyivka, Luhansk oblast.

He shared his impressions and emotions about what he had seen on Facebook.

"We drove into Makiyivka, Luhansk oblast, along a beaten-down road, with burnt machinery lying around on both sides. The music of war accompanied us through the entire journey: tanks, artillery, rifle shots. Rain was falling on the hood of the car as it was cutting into the depths of the newly liberated land. A ruined house, the stench of gunpowder and the muddy sludge from tank treads added to the ambience. The people in Makiyivka stayed there for eight months; they saw the so-called LPR formations, the Kadyrovites, the Russian army. Everyone has their own story: from taser torture to attempted execution," the journalist wrote.

According to him, in the village, a girl called Sofia and her mother ran out towards them from their house, which was completely ruined. A Russian shell had hit it.

"The kid went out into the yard, holding a Peppa the Pig in her hands. 'How can I abandon her? She has already gone through half the war.' The aquarium did not make it. It broke into small pieces, but the pig survived.

"Sofiyka stands in the middle of the street, without a home and with her friend in hand. Where will they go now? Where is her home? How is she to live? It seems that the child no longer has thoughts in his head. Fear. Sheer fear. Her gaze was so sharp that I could feel a lump forming in my throat. She was not looking at me, not at her mother, and not even at her house. She was staring somewhere far away. Through the wall. Into nowhere," recalls Maryan Kushnir.

According to him, at that time, a projectile hit the village, and Sofiyka and her mother ran to Maryan's car. The family was evacuated.

In his comment to an IMI representative, the Radio Liberty correspondent noted that 14 people were evacuated from the village on that day. The evacuation mission was organized by volunteer Olha Zaytseva. The correspondent arrived in the village with her.

This year, Radio Liberty journalist and war correspondent Maryan Kushnir won the Ukrainian contest "Honor of the Trade". His article "The battle in Kyiv Oblast: the Ukrainian army launches a counteroffensive" won in the "Best news coverage of a high-profile event" nomination.