During Zelensky's visit, journalists in Dnipro authorized to ask only two questions 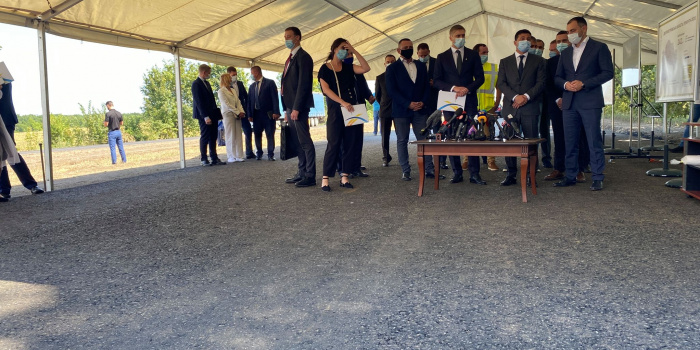 In Dnipro, journalists were allowed to ask only two questions to President Volodymyr Zelensky during his visit to the region on August 26. The journalist with Suspilne (public broadcaster)Yulia Bezborodko told it IMI representatives in the region.

According to her, Zelensky's spokeswoman Yulia Mendel said the press that only two questions from all the journalists could be asked.

Also, Bezborodko added,the journalists were pushed away from the president by a distance of about two meters during the briefing, referring to the social distancing.

"Yulia Mendel asked the president's bodyguards to move us to a safe distance, citing lockdown restrictions, but it was not one and a half meters, it was at least two meters. And because of it,  we could hardly hear Zelensky, we were forced to violate the same quarantine norms, and to stand close to each other to reach out and at least hear something. After the president's speech, Julia Mendel said that the president would answer questions from regional media and she chose those who will aks question She looked at the table with the microphones and said that channels 11th  and 34th would do it. We could only ask for some clarification about these questions - they asked about the Dnipro airport and the postponement of the Normandy meeting, "the journalist said.

According to the IMI representative, during his visit to Dnipro Volodymyr Zelenskyi spoke about construction of the airport in Dnipro, repayment of Pivdenmash's debts, and introduced candidates for mayors of Dnipro and Kryvyi Rih from the Servant of the People party.

It will be recalled that Channel 11, or Sterkh Television and Radio Company, Natural Investment LLC, is part of Viktor Pinchuk's list of media resources.

As IMI reported, on August 26th, in Kryvyi Rih, local journalists were not accredited for any meeting of the President Volodymyr Zelensky, who came to Dnipropetrovsk region on August 26 and 27 on a working visit

On August 19 in  at least four local media outlets in Zaporizhia were not accredited to cover Ukrainian President Volodymyr Zelensky's working trip to the region.

On July 9, Volyn journalists were not allowed to attend all meetings of President of Ukraine Volodymyr Zelensky during his working trip under the pretext of lockdown measures.

On June 26, Kherson journalists, who were not accredited to meet with Ukrainian President, went on strike: they broadcast news without text, published blank pages.

On June 2, Khmelnytsky's vsim.ua and Ye reported that their journalists, as well as journalists from many print and online media outlets, were not accredited to cover President Volodymyr Zelensky's working visit to the region on June 3-4.