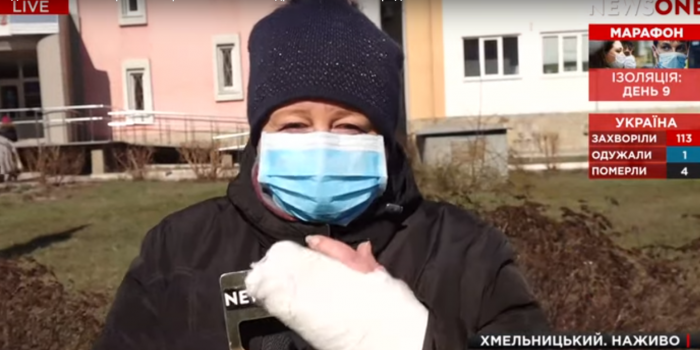 The Khmelnytsky Court of Appeal upheld the decision of the first instance court in the case regarding an attack on journalist Tetyana Syvokon, then working for NewsOne channel, who was filming a story about the COVID-19 restrictions introduced in Krasyliv town, together with her cameraman. This was announced by the Khmelnytsky Region Prosecutor's Office.

We remind you that on October 7, 2021, the Starokostyantyniv Court of Khmelnytsky Oblast sentenced the man who attacked the journalist to two years in prison, exempting him from serving the sentence with a probationary period of one year.

The attack itself took place on March 25, 2020, in Krasyliv, Khmelnytsky oblast. The channel's camera crew entered a store on the second floor of the "Mega" shopping mall. Approaching the counter, the journalist took a package of face masks and, introducing herself to the cashier as a journalist, inquired about the sales and sourcing of the face masks. The man replied that the masks were not for sale, although there was the store's price tag on them. In the course of the dispute, the convict started twisting her arm, causing her bodily harm. The police opened a case under Part 2 of Art. 345-1 "Threat or violence against a journalist", and in October 2020, an indictment was submitted to the court.

The victim's representative asked to first instance court to change the ruling and sentence the accused to two years in prison, to grant the civil lawsuit in full, and fine the accused UAH 200 thousand in moral redress.

The journalist's attorney said that the punishment imposed on the accused would have no real negative effect on his life, and that the fine sum determined by the first instance court (UAH 10 thousand hryvnias – Ed.) was unreasonable, because the victim had been forcibly deprived of the ability to work and live at her usual pace, and the damage done to her health was irreparable.

"The assigned... penalty meets the requirements of the law and upholds the principles of legality, justice, reasonableness, and individualization of punishment; it is necessary and sufficient for correcting the accused's behaviour and preventing further offenses, and it is not too lenient," the court of appeal said in their decision.

The court noted that the arguments of the victim's attorney regarding the need for a bigger moral redress sum, in their opinion, were also groundless.

In the end, the panel of judges of the court of appeal upheld the first instance court's decision, and the appeals were dismissed. The court's decision became legally binding the moment it was announced, but it can be contested through a cassation procedure.