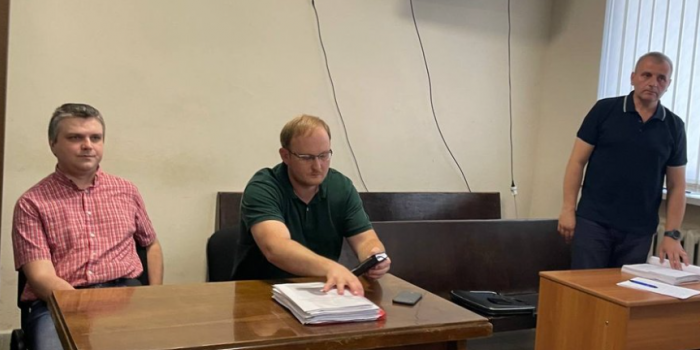 Judge of the Primorsky District Court of Odesa Ilya Lonsky decided to continue the hearing in the case of Yuri Tkachov, editor of pro-russian online publication "Timer," on July 4 due to inability to examine the evidence: there was no equipment for reading memory cards available. This was reported by Suspilne correspondent from the site.

Yuri Tkachov is charged under Art. 263 of the Criminal code of Ukraine. At the first hearing, Tkachov pleaded not guilty and said he had not seen the explosives found in his home before, and said they could have been planted by the police or the witnesses present during the search.

The defendant's lawyer Oleksiy Hlazov said during the June 13 hearing that he had filed a complaint with the SBI over possible forging of evidence by the investigation. At the hearing, the prosecutor and the lawyer asked the accused questions in order to establish who was in the apartment during the search and where they stood. Prosecutor Serhiy Poyatsyka declined to comment.

We remind that on February 27, 2022, "Dumskaya," citing the SSU, reported that editor-in-chief of Odesa's pro-russian online edition "Timer" Yury Tkachov is being prosecuted under the articles of the Criminal Code on treason, encroaching on the inviolability of Ukraine, and obstruction of activities of the Armed forces of Ukraine. According to the SSU, since the beginning of the full-scale russian invasion of Ukraine, Tkachov began aggressively promoting the occupiers' interests and organized the gathering of information about the Ukrainian military's movements. For that, he was wanted by police.

On March 19, Tkachov was detained, and on June 9, he left the detention center on bail and recorded a video address.

"My epic is not over yet. Trial is ahead. I am being charged under Article 263 of the Criminal Code of Ukraine (storage of ammunition and explosives). As I said, I saw these objects for the first time in my life. I intend to prove it and hope for an acquittal," Tkachov said then.

Yuri Tkachov is a former editor of pro-russian online publication "Timer," which has connections to former People's Deputy Ihor Markov. The latter is currently in moscow, where he speaks on local propaganda talk shows and supports the russian invasion of Ukraine.

In 2015, the SSU officers searched Yuri Tkachov's residence in the case for publishing content in support of the unrecognized "LPR" and "DPR" on "Timer's" pages.

Tkachov was an Anti-Maidan supporter in Odesa; namely, he spoke at a rally on Kulikovo Pole in the spring of 2014. He was a member of a public commission for investigation of the May 2, 2014 events in Odesa, the "May 2 Group." He later left the group due to disagreements.