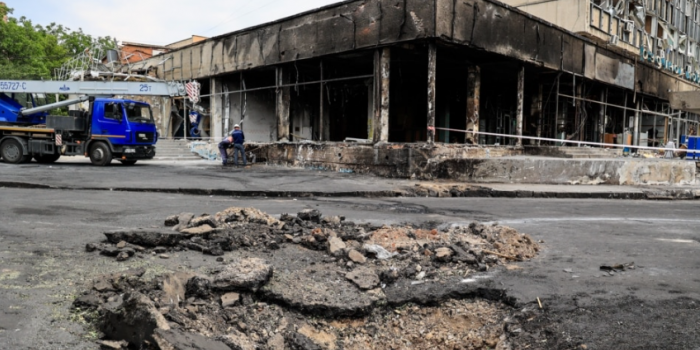 The Commission on Journalistic Ethics condemned the very fact of the interview that the Italian RAI News 24 channel's filming crew took with Iryna Dmitrieva, who had lost her daughter during a missile strike on Vinnytsia, and the way in which it was conducted. CJE called on the Ministry of Health to develop rules for admitting journalists into hospitals together with the journalistic community.

This is said in CJE's statement regarding the interview with the survivor, who lost her daughter and was seriously injured in the July 14 missile strike on Vinnytsia.

On July 16, 2022, Anton Kudinov, a fixer of the Italian TV channel RAI News 24, posted a video interview with Iryna Dmitrieva, who lost her daughter and was seriously injured in the July 14 missile strike on Vinnytsia, on his Facebook page.

"The interview was recorded by RAI News 24 correspondent Laura Tangherlini. The video was shot in the intensive care unit. The media group that conducted the filming gave the survivor a phone with a video of the girl still alive, and recorded the woman's reaction to this video and to the news of her own child's death. Subsequently, Kudinov wrote that the purpose of this interview was to draw the world's attention to the war in Ukraine and that the woman herself expressed such a wish. However, the survivor's relatives denied giving consent to this interview," CJE notes.

The Commission on Journalistic Ethics has sternly condemned such approach to covering the topic of people who have lost their loved ones, who themselves have suffered injuries or any other traumas, including psychological ones.

The Commission notes that it understands the need to constantly focus the world community's attention on russian terrorist attacks on the civilian population of Ukraine. However, they believe that such coverage should not cause additional pain and suffering to all victims of russian military aggression, retraumatizing them. In such cases, the priority is not the audience's curiosity, but the psychological state of the affected person.

In addition, CJE pointed out that the Recommendations on the protection of privacy in the work of the mass media, prepared by the Council of Europe experts, contain multiple items related to interviews with people in hospitals.

"The Commission believes that journalists should take into account not only the person's wish to give an interview, but also the person's real state, which can be influenced by many factors, including how much time has passed since resuscitation and after taking anesthetics, the person's psychological condition, etc. Only doctors and psychologists can assess a person's condition, and therefore their opinion on the recording of such an interview is important, if not decisive, and should be taken into account," CJE notes.

The Commission, condemning the very fact of the interview with survivor Iryna Dmitrieva, the way in which it was conducted, and Laura Tangherlini and Anton Kudinov's reluctance to admit their own unethical behavior and apologize, urges:

As Detector Media reported, Anton Kudinov was criticized for the posted video with the survivor. However, he claimed that she had "agreed to be interviewed and, together with her family, provided additional content" for him. In an interview with Suspilne, the mother of Iryna Dmitrieva said that her daughter has not been told about her child's death: the doctors forbid it, because, according to them, the news can kill her.

RAI News 24 correspondent Laura Tangherlini, who interviewed Iryna Dmitrieva, the Vinnytsia missile strike survivor, denied the accusations of violation of journalistic ethics. "Nothing true in accusations against me for interview with little Liza's mother and the piece aired confirms it; interviews authorized and agreed," she tweeted, adding that no "content published by third parties" concerns her and that she is ready for legal action.