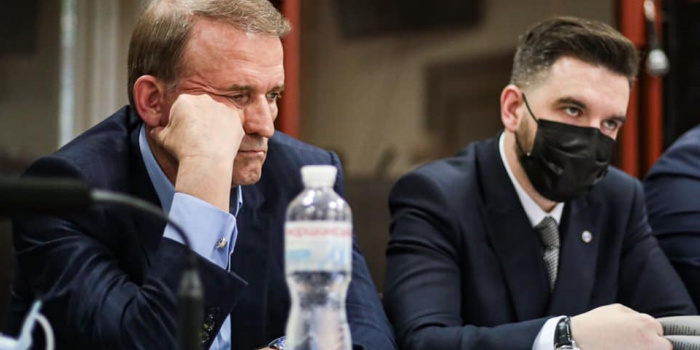 The investigation into the case of in treason and embezzlement of national resources by MPs from OPFL Viktor Medvedchuk and Taras Kozak has been completed. The defense can study the case files, and then the Prosecutor General's Office will refer matter to court.

It is noted that the case files concerning Taras Kozak were separated into a another proceeding, as he is wanted, and the main investigative actions against him have also been completed.

The investigation established that Viktor Medvedchuk and Taras Kozak, together with Russian officials, attempted to embezzle national values, it is question of an illegal oil and gas production in the temporarily occupied territory of the Autonomous Republic of Crimea.

“The investigation has evidence that the suspects handed over to the occupation authorities the material and documentary base for the development of the Hlyboka field. It is located in the Prykerchensky shelf of the Black Sea in the exclusive (marine) economic zone of Ukraine. Without the help of these people's deputies of the Russian Federation, it would take years and huge resources to develop a site with promising reserves of over 38 billion hryvnias, ”the GPO said.

With the assistance of one of the people's deputies, a kind of "successor" of an enterprise registered in Ukraine was created in the temporarily occupied territory, in order to obtain illegal "permits" from the aggressor state on the basis of already available Ukrainian permits and ready technical documents.

In addition, according to the prosecutor's office, the deputies collected information about the location of military formations in Ukraine.

"In this case, we are talking about the reporting of confidential information about one of the military units of the Ukrainian army, as well as active participation in the development of the so-called "Promin Project". According to some experts, the project was aimed at the systematic promotion and lobbying of political, geo-economic and other interests of the Russian Federation, beneficial changes in the domestic and foreign policy of Ukraine. Among the tools of the program, which was personally edited by one of the suspects, is the formation of a network of agents of influence and a layer of the population loyal to Russia. "Promin project was supposed to promote the formation of public opinion in Ukraine, the adoption of favorable for Russia administrative, economic, political decisions that will destroy the independence of state power within the country and independence in international relations," – as to the press service.

The GPO added there was a number of other criminal proceedings concerning crimes against the sovereignty, territorial integrity, defense and economic security of Ukraine, which might involve both former and current deputies of Ukraine.

At present, Viktor Medvedchuk is placed under house arrest, Taras Kozak is wanted.