After interview with Zelensky, regional state administrations in 22 regions spread the same PR 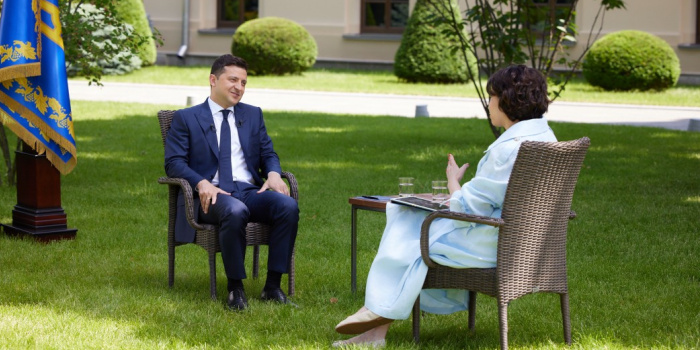 22 Ukrainian regional state administrations posted on their websites and spread on social media pages the same quotes from an interview with President Volodymyr Zelensky on TV channel 1 + 1. This was reported by regional representatives of IMI.

The publications of the regional state administration advertise the presidential program "Big Construction" and announce the forthcoming meeting of Zelensky with US President Joe Biden. According to IMI experts, the publications contain signs of political PR, in particular, it is indicated by complementary evaluative judgments in favor of the head of state, the lack of balance. The news items had some signs of being placed under state-control.

Entries entitled "President:" Big Construction "is a really cool program that helped save jobs during the pandemic", "At a meeting with US President Volodymyr Zelensky will raise security and economic issues", "President: My competitors in the election are bad roads , War and poverty "were posted on June 25 on the websites of 22 regional state administrations:

No news items of the kind were found on the websites of Lviv and Odesa Regional State Administrations.

Comment of IMI lawyer Ali Safarov: "The activities of regional administrations are regulated by the Law of Ukraine " On Local State Administrations. The law covers the issues of legitimacy , protection of rights, freedoms and legitimate interest of the citizens, social and economic development of relevant territories, land use natural resources, environmental protection and other similar issues. Coverage of activity of the President of Ukraine is not within the competence of regional administrations. Although the heads of administrations appointed by the head of state, he is not authorized to directly give instructions to the heads of administrations. According to Article 19 of the Constitution of Ukraine, public authorities and local self-government bodies, their officials are obliged to act only on the basis, within the powers and in the manner provided by the Constitution and laws of Ukraine. If an official performs something superfluous in the performance of his duties, it may be qualified as exceeding the powers provided by law, which may entail liability up to criminal liability. "