WAR AND GENDER BALANCE. MONITORING SURVEY FOR THE 3RD QUARTER OF 2022

Russia's full-scale invasion has changed the agenda, the thematic diversity, and the experts pool of the mass media. In the third quarter of 2022, IMI researchers found that, on average, 15% of articles cite female experts, while men as experts are represented in 85% of the expert-citing articles in Ukrainian online media. Compared to the previous quarter, the indicator of gender balance in the media has decreased by 1% in favor of men.

These are the data of the media monitoring on gender balance conducted by the Institute of Mass Information in August–September 2022*.

30% of the material features women as heroines, while men are featured in 70% of online media content. Compared to the previous quarter, the presence of heroines has grown by 8%.

According to IMI's research, in the third quarter of 2022, the websites of RBC Ukraine and Suspilne featured the most female experts (22% and 20% of the content with expert commentary respectively). At the same time, the following media outlets involved women as experts the least: Censor (8%), Korrespondent (7%), and Gordon (6%).

As for the thematic content, in the 3rd quarter, female experts most often gave comments on: war and the army (29.3% of all comments by female experts), international affairs (20.7%). Much fewer female experts were involved in commenting on political topics (10.3%), police news, and societal topics (8.6% each). The mentions of female experts in business, economics, human rights, science, and weather were scant. 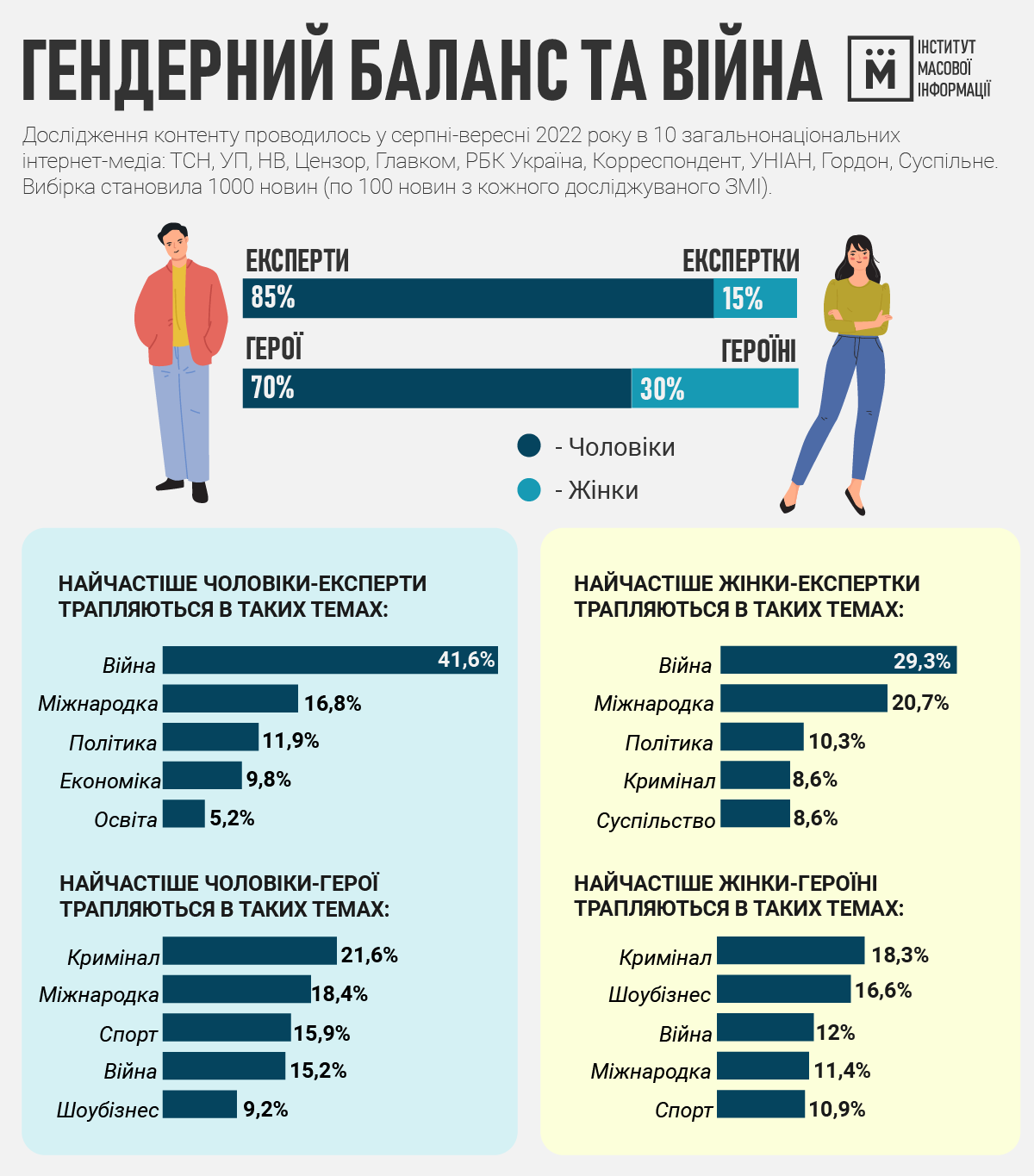 According to IMI's research data, female experts commented on the news about the war most often. Such material amounted to almost a third (29.3%). Most of the comments on the subject of the war were taken from the head of the United Coordination Press Center of the Defense Forces of Ukraine "Pivden," Natalia Humenyuk. Content with expert comments by Humenyuk was about the occupiers' losses, the liberation of occupied settlements, and operational information in the Kherson direction.

In addition to Humenyuk, comments on the war and the Russians' missile strikes were given by the spokeswoman of the Donetsk military administration Tetyana Ihnatchenko:

In articles related to the international affairs (20.7% of all comments by female experts), the media most often cited the President of the European Commission, Ursula von der Leyen. In these articles, the expert stated that the EU should cap the price of Russian gas in order to prevent Putin's attempts to manipulate the energy market.

There were also articles citing the head of the German Foreign Ministry, Annalena Baerbock, about Germany suggesting that EU countries suspend the simplified visa regime with Russia.

As for articles on politics, most of the comments in the media were provided by Olha Vasylevska-Smahliuk, a People's Deputy from the Finance Committee of the Verkhovna Rada, SotP faction.

In addition, there were occasional comments from Deputy Minister of Social Policy Ulyana Tokareva and Kyiv City Council member Ksenia Semenova, a member of the renaming commission.

8.6% of all articles citing female experts was about police news. Expert comments on this topic were coming from the spokeswomen of the regional police departments and the Ministry of Emergency Situations.

Another 8.6% of articles with quotes from female experts were about social issues. The experts cited in these articles were psychologists and volunteers.

As for male experts in online media, their comments most often occurred in articles about the war (41.6% of all comments from male experts). Much less men commented on international affairs (16.8%), politics (11.9%), business and economy (9.8%), and education (5.2%).

Almost half of comments from male experts were about the war (41.6%). A significant part of this expertise concerned the rocket attacks on Ukrainian cities. Ukrainian politicians and officials provided comments on the effect of the war in their regions. During the monitoring period, the most comments came from Melitopol Mayor Ivan Fedorov, head of the Mykolaiv RMA Vitaliy Kim, head of the Sumy RMA Dmytro Zhyvytsky, head of the Kharkiv RMA Oleh Syniehubov, Mariupol Mayor Petro Andryushchenko, and Kharkiv Mayor Ihor Terekhov.

16.8% of articles featuring comments by male experts were related to international affairs. These articles were mostly about the war in Ukraine:

The media articles about politics (11,9%) most oftenly quoted Ukrainian President Volodymyr Zelensky. His statements and comments were about the war and Ukraine's potential.

There were also occasional articles with expert comments from Ukrainian officials and ministers:

In 9.8% of articles, men were business and economics experts.

One of the top experts on this topic was Minister of Infrastructure Oleksandr Kubrakov, who commented on the successful export of Ukrainian agricultural products through sea ports.

In addition, experts commented on the information that "the gas crisis in Europe may last several winters." They also said talked about the positive effect that the export of metal products, grain, and oil crops will have on Ukraine's budget.

There were also occasional comments from men on the following subjects: education, cime, society, human rights, healthcare, and IT.

HEROINES AND HEROES IN ONLINE MEDIA

The percent of female heroines has grown by 8% compared to the previous quarter and now amounts to 30%. The representation of men still remains almost twice as high – 70%.

The leaders in involving women as news heroines are TSN (47% of the total number of heroes) and UNIAN (41%). Although TSN traditionally maintains a high rate of the female presences, this website does mention women in some sexist articles, namely those related to show business.

During the monitoring period, the fewest female heroines were recorded on the websites of NV (9% of all news heroes and heroines) and RBC Ukraine (11%). However, these media broadcasted no sexist or discriminatory messages against women.

Women most often appeared as heroines in police news (18.3% of all mentions of heroines). During the monitoring period, there were plenty police news about female collaborators and separatists leaking sensitive information about the UAF to the Russians.

The police news also featured women who were car accident victims or violated the Criminal Code of Ukraine.

As for show business news, such articles accounted for 16.6% of all mentions of women as heroines. Interestingly, this survey recorded significantly fewer articles about war and celebrities, contrasted with the previous results. This time, the content was mostly about the private lives of famous people, which indicates a certain degree of being accustomed to the war and show business returning to its usual PR practices.

UNIAN editors also decided to remind us how the Russians are doing.

TSN editors released some sexist articles about women. For example, in the article about the celebrity Giorgia Soleri, the editor uses every sentence in the headline to emphasize that the woman has a bust. Such messages devalue her as a professional and a person, presenting her merely as a sexual object.

12% of the articles featuring women as heroines were about the war. Due to the full-scale war, the heroines such articles are usually shelling victims or close relatives of the fallen defenders.

There were also occasional articles about the women who serve in the army:

Nearly every ninth article featuring women as heroines was about sports (10,9%). Mostly the heroines of these articles were Ukrainian tennis and beach soccer players.

The monitoring period also saw occasional mentions of women as heroines in articles about education, the society, culture, human rights, and healthcare.

In the police news, most articles featuring men as heroes portrayed them as separatists and collaborators who cooperate with the Russians.

There were also some police news articles featuring men as victims or criminals.

In articles on international affairs, the featured men were mostly Russian officials and politicians.

There were also occasional mentions of other sportsmen, including the articles about sports traumas:

In most articles about the war (15,2%), the featured men were soldiers who were killed in action or by Russian shelling.

Men as heroes were also featured in articles about show business, business and economy, politics, culture, and society.

IMI researchers recorded that 30% of the media included in the monitoring still do not adhere to the use of feminine forms of job titles in their articles. Such violations were recorded on the websites of RBC Ukraine, Korrespondent, and UNIAN. For example, the editors of RBC Ukraine ignore the use of feminine forms while referring to Natalia Humenyuk, head of the joint coordination press center of the Defense Forces of Ukraine "Pivden." The editors use the lexeme kerivnyk (masculine form of "head," as opposed to kerivnytsia). Or in the article quoting the Austrian Minister of Defense Claudia Tanner (RBC Ukraine – minister, not ministerka). If you are in doubt about how to create the feminine form correctly, linguists advise using "Mrs. Minister," which will be according to the rules and count as a feminine form.

In the case of Korrespondent, there were also cases when journalists did not use the feminine form, for example, "Emily Thornberry is the Labor Party's shadow minister for trade."

UNIAN journalists used the word nachalnyk (boss) instead of nachalnytsia in the texts mentioning Natalya Humenyuk. Also, in the media, there are systematic problems when quoting weather forecaster Natalka Didenko, who is often called a "blogger and synoptyk (weatherman)."

⚡️ If your media is not sure where to start improving their gender balance, we suggest you do a self-assessment and count how many female experts and heroines you have, and how many male experts and heroes. We guarantee you will be surprised. We at IMI have also prepared tips for media outlets willing to improve their gender balance: 10 Gender Balance Recommendations for Journalists.