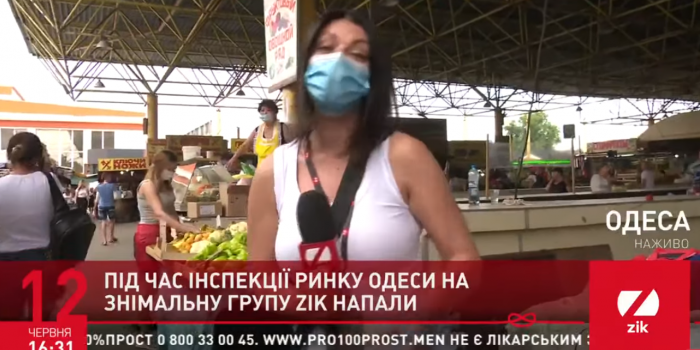 In Odessa on June 12, a film crew with the ZIK TV channel was assaulted by some unknown young men, as they were inspecting the local market "Privoz". The correspondent for ZIK Alla Zhiznevska reported it from Odessa, as ZIK said.

According to Zhyznevska, she turned to the State Food and Consumer Service to check the quality of products they sold on the market, as one of the venders did not have the relevant documents.

Then, some unknown young guys came to the place and banned the journalists to take pictures.

“At one moment, six men of different stature arrived and started pushing us out. Without introducing themselves, without explaining what was going on, they said that it was impossible to film here, and began to push us out. We went outside, the guys surrounded us. I called the police. While we were waiting for the patrol, they stood for 15 minutes, surrounded us, filmed on the phone. I introduced myself, showed my press card, the guys didn't introduce themselves to us. At some point, someone called them, and they simultaneously went off in different directions, ”the correspondent said.

At the same time, Alla Zhyznevska said that she would not complain to the police.

As IMI reported, on April 2 in Kyiv, unknown men attacked the camera crew of the ZIK TV channel while inspecting the capital's parks and sports grounds for compliance with quarantine by citizens.