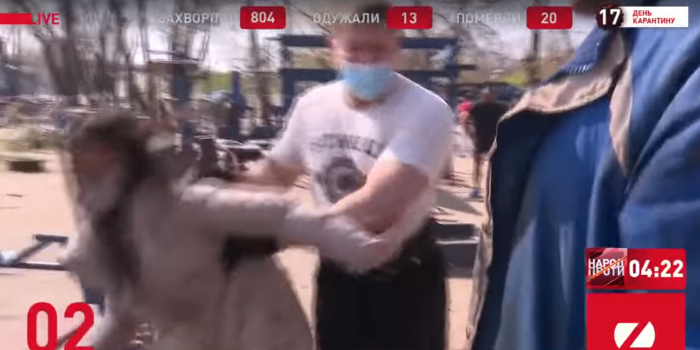 In Kyiv, on April 2, some unidentified men attacked a TV crew of ZIK TV, as the journalists were filming the report on observance of quarantine at sports grounds in Kyiv. As this was reported on the ZIK website.

Several  young persons assaulted the journalists with ZIK in Hydropark, as the journalist Alla Zhiznevska asked them to explain why they came to the sports ground, which is prohibited during quarantine period.

"Today, we have been inspecting the city. We were to check, whether people were in quarantine, how they behaved, whether they respected the safe distance. But some bad scene happened at Hydropark, as Alla Zhiznevska said.

Journalists of ZIK TV channel have addressed to the Minister of Internal Affairs Arsen Avakov and the mayor Vitali Klitschko and demanded to probe in.

After the attack, the journalist complained of back pain: “When 150 kilogrammes of weight pushes you in the back and hits you, this is very unpleasant feeling. Actually, we called the police, and then everyone rallied around us. There were at least 30 men who swore and threatened to pick up my phone and to cause physical harm to me and to drive me out of there.”