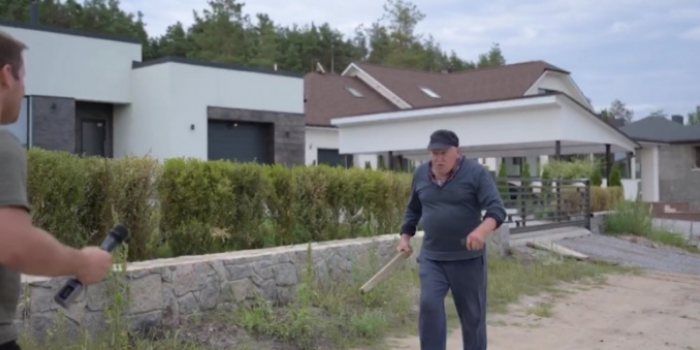 Zhytomyr region authorities notified a Zhytomyr resident of suspicion for threatening Oleksandr Kryzhanivskyi, a journalist with the Anti-Rating investigation program, and interfering with filming the buildings on Teteriv riverbank.

According to the investigation, in August last year, a 63-year-old suspect, calling himself a security guard of private property, forbade the journalist to film a story about the construction of private houses on Teteriv riverbank in Zhytomyr.

"He aggressively threatened the journalist with physical violence, attacking him with a wooden bat with a metal part on it and using obscene language. Thus, the person involved in the case prevented the journalist from performing his professional duties during the filming of private houses built on land plots in the riverbank zone," the prosecutor's office said.

As IMI reported, on August 19, 2021, in Zhytomyr, during the filming of the Anti-Rating investigative journalism program, a security guard of private buildings on the Teteriv riverbank attacked journalist Oleksandr Kryzhanivsky with his fists and threatened him.

Alexander said that they were filming the house where the deputy of the city council and the chairman of the budget commission Yuriy Moiseyev lived.

“We came to shoot the material for a program about building construction on Teteriv riverbank. We learned that the city council deputy and chairman of the budget commission Yuriy Moiseyev has a house here. This information was confirmed to us by a security guard. We also spoke amicably to one of the neighbors, Leonid Krieger, who did not mention who lived next door. At first, the security guard did not interfere with the shooting, but when we talked on the phone with one of the owners – the man attacked me, first with obscene swearing and fists, then with a bat. No one was injured, the cameraman and I did not risk our lives and left. I did not call the police. I published information about this situation on my social media, after which I received a call from the prosecutor's office and was told that the case had been opened. Yuriy Moiseyev confirmed in a telephone conversation that he has been living in the house we were filming for about two months now," the journalist said.