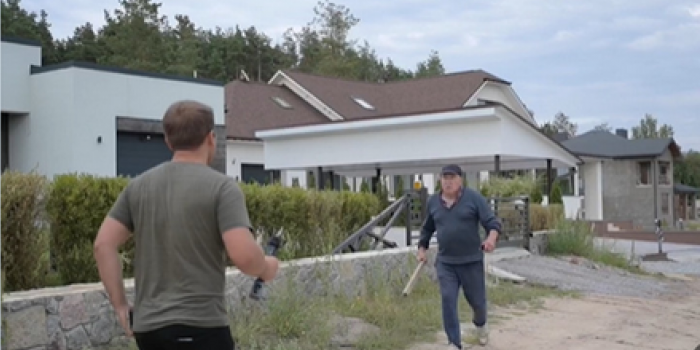 The Korolovsky District Court of Zhytomyr declared the security guard accused of obstructing the work of "Antirating" investigation program journalist Oleksandr Kryzhanivsky and threatening him innocent and acquitted him.

The court passed such a sentence on August 23, reports Sudovy Reporter.

According to the court ruling, in August 2021, the founder and editor-in-chief of CSO "Anticorruption Rating" Oleksandr Kryzhanivsky arrived to film a story about illegal construction on the bank of the Teteriv river, where the land is communally owned. In particular, he knew that a deputy of the Zhytomyr City Council lived there. The journalist was accompanied by his wife, who acted as cameraperson and held a small video camera in her hands.

On the spot, the journalist met a stranger whom he mistook for a security guard. He asked where exactly the deputy lived, and said that he was headed to the river, to which the man did not object. Kryzhanivsky did not introduce himself to security guard as a journalist and did not explain the real purpose of his visit. He and his wife started filming, using the video camera and a mobile phone. The deputy was absent at the place. But the journalists met one of the residents who lived nearby and interviewed him.

After recording the interview, the journalist and camerawoman headed towards the exit. They intended to wait for the deputy and record the boat base premises using a drone.

At that time, a security guard approached the journalist, handed him a mobile phone and asked him to talk to an unknown man. The journalist introduced himself as the editor-in-chief of the "Antirating" project. His interlocutor on the phone started explaining that the deputy did not live on the territory of the boat base. But the journalist objected, referring to the fact that the security guard had just confirmed this to him.

The latter, hearing this information (which according to him is untrue), grabbed a wooden bat and began to chase the journalist and the camerawoman out, uttering threats and cursing.

Fearing for their wellbeing, the journalist and camerawoman left the territory of the boat base without waiting for the deputy to return and decided against filming from the drone.

The accused claimed that he did not know that the victim was a journalist, since he had not identified himself, had not shown his ID, and hadn't had a press card on his clothes. Arriving at the boat base, he had not mentioned that he planned to make a report. The accused did not see him filming. He also had no idea that the object that the victim was holding in his hand was a microphone, and that the photocamera-like object in the woman's hands was a video camera.

The accused imagines a journalist as a person with a large video camera and carrying a press card.

Instead, the victim believes that the security guard could have told that he was a journalist, because during the phone conversation that was happening in his presence, Kryzhanivsky called himself "editor."

The accused denied this, saying that he had understood that to mean that the victim was a book editor. During the phone call, the guest in his presence started telling lies about the information on the deputy's place of residence that Kryzhanivsky had allegedly received from him. This angered him. Thus, acting on emotion, he took a wooden bet and drove the man out of the base. He sees the victim's behavior as provocative, but his assessment of his own actions is now negative as well.

It was clear from the documents that a month before the conflict, the local deputy indeed rented a house on the riverbank. Interrogated as a witness, the deputy said that he had known the victim to be a journalist for a long time. That day, he was just leaving the base when he noticed that a journalist had filmed him on his mobile phone. Later, he learned about the fight with the security guard from the media. He believes that the journalist's actions were provocative, since he could have contacted him and gotten all the information, which is what he did later.

According to the court, the fact that the victim did not introduce himself as a journalist and did not announce the filming was confirmed by the testimonies of the victim himself and his wife, as well as by the video recordings of the event.

The court was critical of the possibility the accused could have recognized the person as a journalist by standing next to him during a phone conversation, in which the victim had called himself the editor-in-chief of the Antirating project.

Accusations cannot be based on assumptions. And all doubts regarding the proof of a person's guilt are interpreted in the person's favor.

As IMI reported, in June 2022, the Korolovsky District Court of Zhytomyr started the trial in the case of attack on Oleksandr Kryzhanivsky, a journalist of the investigation program "Antirating."

On August 19, 2021, in Zhytomyr, during the filming of the journalist investigation program "Antirating," a security guard of the private buildings on the Teteriv riverbank attacked journalist Oleksandr Kryzhanivsky with his fists and threatened him.

On May 6, 2022, Zhytomyr region authorities notified a Zhytomyr resident of suspicion for threatening Oleksandr Kryzhanivsky, a journalist with the Antirating investigation program, and interfering with filming the buildings on Teteriv riverbank. The suspicion note was issued under Part 1 of Art. 345-1 (threat of violence made against a journalist due to performance by this journalist of his/her lawful professional activity) and Part 1 of Art. 171 of the Criminal Code of Ukraine (willful preclusion of lawful professional activities of journalists).