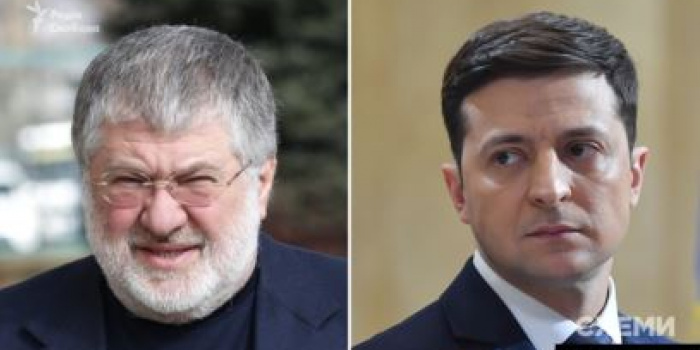 Photo credit: Radio Liberty
Ukrainian President Volodymyr Zelensky has said he admits the escalation of the conflict with the owner of the 1+1 television channel, businessman Ihor Kolomoisky, after employees of the Security Service of Ukraine (SBU) searched the offices of journalists of the Hroshi (Money) investigation project in the case of leaked audio recordings involving Prime Minister Oleksiy Honcharuk, as Ukrinform reported.

He said this in an interview with the Interfax-Ukraine news agency.

"I have so many conflicts with everyone that, you know, plus one, one plus one is such a story," Zelensky said.

"By the way, I like this channel because our product is there, because it's a long relationship. It doesn't concern the situation that the SBU has with Oleksandr Dubinsky's employees. [...] Well, there will be a conflict. What can I do?" Zelensky said.

Speaking about the investigation into the case of secret audio recordings involving the prime minister, Zelensky said that "the main question is who ordered it, the second one is who did it, and the third one is who provided this information. We need to solve this matter."

The SBU conducted searches in the building of the 1+1 television channel late on February 5.

The SBU said the searches were not related to the channel's activities but were carried out in relation to specific persons, at the places where they could create and store audiotapes received in an illegitimate manner. In addition, investigative measures were carried out in relation to other persons who are being checked for involvement in the illegal use of special technical means.

The searches were conducted in the case of the unlawful recording of Prime Minister Oleksiy Honcharuk's conversations.