Winners of Anti-Award for sexism "This is the Egg" announced 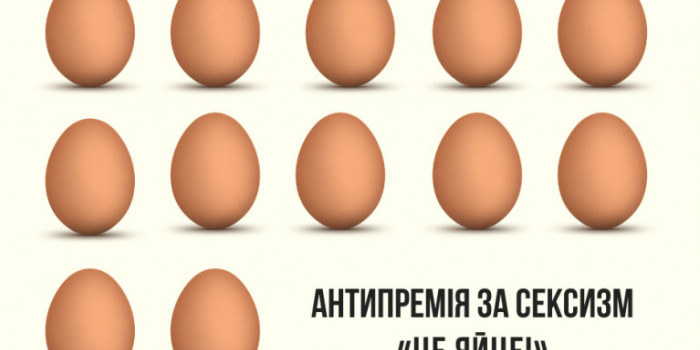 Today in Kyiv, the winners of the "This is the Egg" Anti-Award for sexism have been announced, as ZMINA reported.

In the category "For sexist expression" the winners are:

Oleksandr Bashchenko also accused journalist Olena Lunkova of lying, drinking, and proposed her to kiss him, as he was giving comment for “Vikna” news program (STB TV channel). The StarLightMedia media group has condemned the federation head and blamed him with sexism.

Vladyslav Marchenko, Gender Commissioner for the Zaporizhzhya Regional, for a sexist message in which he shamed women wearing teasing clothes. In his opinion, a short skirt is an excuse to call a woman a prostitute and to offer her sex. After this post, a number of activists launched a flashmob # forgot to askmarchenko..

Another winner is Maksym Buzhansky, Member of Parliament, known for known for calling Olga Dukhnych, a journalist with “Novoye Vremya”, “dopey cow from the odious media”..

President of Ukraine Volodymyr Zelensky also was rewarded the "This is the Egg" prize for male chauvinism. Speaking at Station F's largest startup campus in France, Zelensky called Ukrainian women one of Ukraine’s "big brands".

In the category "Sexist Material", anti-heroes are:

The talk show "Why so?" on "112 Ukraine" TV channel. A torrent of sexist comments were aired on the evening of June 8, 2019, on "Why there are less women in power, than men?" In particular, they said "This is harder for a woman to be in politics than for a man, because this is more complicated to take part in political debates than slicing salads and ironing", "If a woman president falls in love, the country" goes up in smoke", "Increase of women in the European Parliament has led to negative consequences in Europe, Brexit including,""Most women in Ukrainian politics, as well as Ukrainian women presenters, got their jobs thanks to men who promoted their mistresses," "Women are usually used to cover up corruption schemes", "In the men’ offices one should place women, so that the rooms were clean and cool."

While the guests in the studio spoke about women's inferiority, the presenter of the program Yevgeniya Skoryna made no efforts to balance information, to limit discriminatory sayings and she spoke using stereotypes herself.

“Sehodnya” web-based edition. For news called "No boyfriend - no wins: Svitolina lost the second match after breaking up with Monfis", as well as the story titled "Sexmachine”.

Expert tip to avoid sexism: check your information under the mirror system.

The idea is that if you want to write something about a group of women or a single woman and have some doubts, put men in their place. If you wouldn't write it speaking about men, because it looks absurd, you shouldn't write it about women (and vice versa).

* The egg is used to be a symbol of efforts to defend one's own rights in Ukraine. Are you get enough with sexism? Throw an egg !