On December 9, sexists to get "This is the egg" anti-award 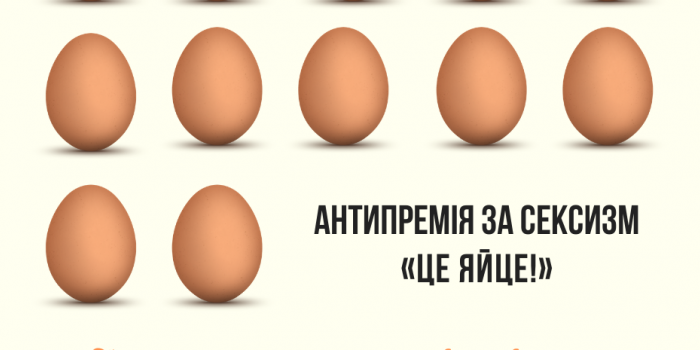 On December 9, at 1:00 pm the winners of sexist Anti-Award “This is the Egg”* are to be awarded in the Ukrainian Crisis Media Center (Kyiv, Khreshchatyk St., 2). The award is conferred to the public figures who in 2019 made sexist statements, as well as to mass media which published discriminatory stories for 2019, as Zmina Human Rights Center reported.

* The egg is used to be a symbol of efforts to defend one's own rights in Ukraine. Are you get enough with sexism? Throw an egg !

Among the participants of the event:

The discussion will be moderated by Irina Virtosu, journalist with ZMINA Human Rights Center.

Anti-award nominees are also invited to attend the ceremony.

“We are deeply convinced that it is only through public discussion and mutual respect that the level of intolerance, sexist attitude and public aggression can be reduced. Neither during the ceremony, nor outside will the organizers of "This is the Egg" anti-award throw eggs onto persistent sexist men and sexist females. But again, we emphasize that sexism is unacceptable, ” as the anti-award press release reads.

Vladyslav Marchenko , a Gender Commissioner for the Zaporizhzhya Regional Council, for a sexist message in which he shamed women wearing teasing clothes. In his opinion, a short skirt is an excuse to call a woman a prostitute and to offer her sex. After this post, a number of activists launched a flashmob # forgot to askmarchenko.

Oleksander Dubinsky, MP from the "Servant of the People", who posted on Facebook : "We are looking for assistants females. I ask those ones who are under 175 cm, please, don’t disturb us. "

Anton Yatsenko, MP, majoritarian. Nominated for employing a comparison that is humiliating for women. "I am not a slut girl, but a MP of four convocations, so we will not turn the Verkhovna Rada into a tent circus," -  on the air of "Nash" TV channel he "explained" his refusal to make a polygraph test due to a scandal with possible bribery in the Verkhovna Rada Committee.

Dmytro Razumkov, Chairman of the parliament. He was nominated for propagating the culture of rape when during a talk show “Right to Power” he compared the Verkhovna Rada work to a rape, describing it as a common and acceptable phenomenon: "I don't think one should not get oneself into a rape and a girl is so-so."

Igor Kolomoisky, Ukrainian oligarch. Interviewed by Censor.net, Kolomoisky said that MP females had to get salary less than the men get, and insisted that women need money "for themselves and children," and the men separately need additional money only for themselves.

Sergey Znamensky, elected member of the Zaporizhzhya Regional Council. He was nominated for saying, "I respect women, but women should do the work that is inherently theirs."

Maksym Buzhansky, MP known for calling Olga Dukhnych, a journalist with “Novoye Vremya”, a “dopey cow from the odious media”.

Oleksandr Bashchenko also accused journalist Olena Lunkova of lying, drinking, and proposed her to kiss him, as he was giving comment for “Vikna” news program (STB TV channel). The StarLightMedia media group has condemned the federation head and blamed him with sexism.

Bogdan Yaremenko , MP. He was nominated for a sexist post “They whisper that the Committee on Foreign Affairs is found out to be the most beautiful. And you won’t believe it, not at all because of my natural unique beauty. Most of our staff are ladies. ”

Olga Bogomolets politician. Mrs Bogomolets was nominated for speaking in the talk show “Countdown” on UA.First:

“I strongly oppose domestic violence, I support all women's movements. As to the gender, this is something else. It is about the uncertainty of gender, it is about being able to choose gender at one’s own will, it is about same-sex marriage. I do not support it, I support Christian values, I support that Ukrainians become more in traditional families, where mom, dad and five children are. ”

Dmytro Gordon, journalist, nominated for asking misfit and sexist questions in an interview with the leader of the People's Front party Arseniy Yatsenyuk and singer, president of the Kyiv National University of Culture and Arts, Mykhaylko Poplavsky.

In particular, Gordon inappropriately asked Yatseniuk about his attitude to Yulia Tymoshenko, the leader of the Batkivshchyna Party:

Gordon : How did you like her as a woman?

Yatsenyuk : She impresses me with her charisma.

In another interview, Gordon tries to find out what kind of relationship the president of the University has with the students females.

Gordon : You have so many students, and beautiful ones. And what, are you passing by?

Poplavsky : When I am asked such provocative questions… I want to say… I always say to them, “Rich men are never old people” [both laugh].

Inter TV channel. In a March 29, 2019 the TV channel aired a story "Spirit healers attack: why people have confidence into swindlers?"

The journalist staged a fortune telling cabinet to find out the schemes of fraudulent divination. The author of the material began her experiment with the phrase: "There are no ugly women, there are low quality attraction spells".

Korrespondent website. For a news item titled "Cabinet of Ministers: Ukraine is one of the" most feminine "countries in the world."

“Novoe Vremya” Website. For material entitled “Gifts on occasion of March 8. The best smartphones for girls. "

Journalist  with “1 + 1” Ivan Vorobyov. For sexism and stereotypes in a story that focused on how the MPs females look instead of their professional qualities.

“Sehodnya” site. For news called "No boyfriend - no wins: Svitolina lost the second match after breaking up with Monfis", as well as the story titled "Sexmachine.