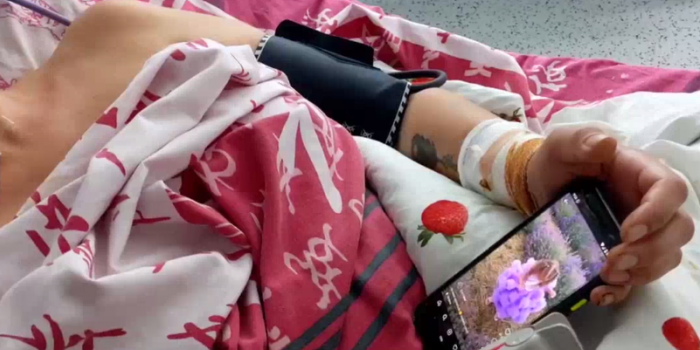 Iryna Dmytrieva, a survivor of a missile attack on Vinnytsia and the mother of the deceased girl Liza, will not file a lawsuit against fixer Anton Kudinov who posted a video from the intensive care unit with excerpts of Iryna's interview.

The wife of Iryna's brother Viktoria Dmytryshyna told Detector Media about this.

"Irynka asked our family not to interfere, not to investigate, and generally to leave this man alone. She does not want these confrontations, and we understand and accept that. Therefore, at Ira's request, there will be no lawsuit filed by family. I hope that someone will find answers to these questions," said Viktoria.

Earlier, Viktoria Dmytryshyna said that the family would file a lawsuit against Anton Kudinov because, according to her, he entered Iryna's ward without permission together with RAI News 24 filming crew and recorded an interview with the injured woman.

We remind that deputy head of the Healthcare and Rehabilitation Department of the Vinnytsia RMA Tetyana Bondarenko stated that Italian RAI News TV channel's fixer 24 Anton Kudinov did not receive permission to interview Iryna Dmytrieva, a survivor of a russian missile strike.

On July 16, 2022, Anton Kudinov, fixer of the Italian TV channel RAI News 24, posted a video interview with Iryna Dmytrieva, who lost her daughter and was seriously injured in the July 14 missile strike on Vinnytsia, on his Facebook page. Anton Kudinov faced backlash over the posted interview with the survivor. However, he claimed that she had "agreed to be interviewed and, together with her family, provided additional content" for him. In an interview with Suspilne, the mother of Iryna Dmytrieva said that her daughter has not been told about her child's death: the doctors forbid it, because, according to them, the news can kill her.