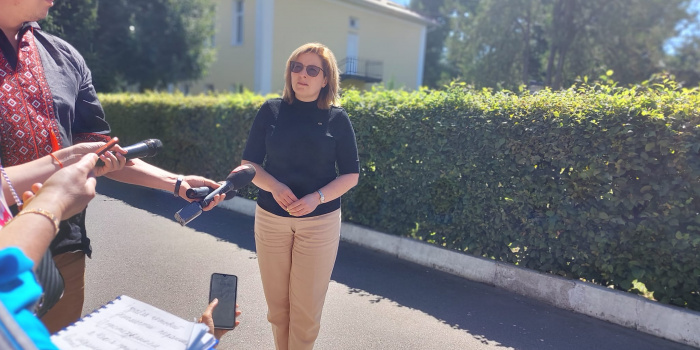 Fixer of the Italian TV channel RAI News 24 Anton Kudinov did not receive permission to interview Iryna Dmytrieva, a survivor of a russian missile strike.

Tetyana Bondarenko, deputy head of the Healthcare and Rehabilitation Department of the Vinnytsia RMA, stated this at a briefing on July 18.

"Almost since the beginning of the war, the RMA Head's order regarding media representatives visiting the region's health care institutions has been in effect in Vinnytsia region. The visit is only to happen with the approval of the Healthcare and Rehabilitation Department of the Vinnytsia RMA," she said.

"We can assure you that the journalist did not receive the relevant permits. We expect a reasonable response from the city's Healthcare Department in this case," said the official.

As Detecror Media notes, on July 16, the Facebook page of the Department of Healthcare and Rehabilitation of the Vinnytsia RMA shared the Fixers UA post with the recording of the interview with Iryna Dmytrieva, which had been made public by Anton Kudinov, and wrote about the survivor's conversation with Italian journalists. The message was later removed from the page.

We remind that on July 16, 2022, Anton Kudinov, fixer of the Italian TV channel RAI News 24, posted a video interview with Iryna Dmytrieva, who lost her daughter and was seriously injured in the July 14 missile strike on Vinnytsia, on his Facebook page. Anton Kudinov faced backlash over the posted interview with the survivor. However, he claimed that she had "agreed to be interviewed and, together with her family, provided additional content" for him. In an interview with Suspilne, the mother of Iryna Dmytrieva said that her daughter has not been told about her child's death: the doctors forbid it, because, according to them, the news can kill her.

On July 17, the Commission on Journalistic Ethics condemned the very fact of the interview that the Italian RAI News 24 channel's filming crew took with Iryna Dmytrieva, who had lost her daughter in a missile strike on Vinnytsia, and the way in which it was conducted.

On July 18, the Independent Media Council turned to the Italian public broadcaster RAI with a request to investigate the incident at the Vinnytsia hospital on July 15, when videographer Anton Kudinov, working as part of the RAI News 24 crew, recorded and posted an interview with Iryna Dmytrieva, a survivor of a russian missile. strike.