Ukrinform to launch its own project to combat fake news 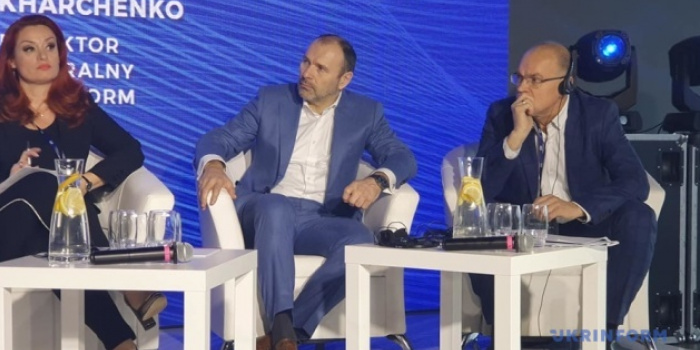 Ukrinform news agency is going to launch its own application for smartphones and computers Defake, as Ukrinform Director General Oleksandr Kharchenko has said at an international conference "Media of the Future" in Warsaw on December 4, as to an Ukrinform correspondent.

"We are planning to implement an innovative technological solution. In order to minimize the destructive impact of such 'cyclical' fake news, and all others, we intend to create a special extension (application) for smartphones and computers – Defake," Kharchenko said.

He also explained how the app will work. The program will automatically read any text that appears on the screen of a user's computer or smartphone. When keywords pointing to a possible fake news story are found, the application will highlight the key of those words with a separate color, as an active link. Clicking on it, a user is not redirected to another website but sees on the same page above the highlighted word a small semi-transparent window that outlines basic facts about this information.

Besides this, Kharchenko spoke of three stages in the information war the Kremlin is waging against Ukraine in social media.

He stressed that several stages of Russia's information activity against Ukraine in social networking sites could be distinguished in recent years. In particular, at the first stage, Russian social networking sites VKontakte and Odnoklassiniki were one of the main channels of import of Russian propaganda to Ukraine. According to Kharchenko, during the presidency of Petro Poroshenko, an attempt was made through social media to organize the Maidan against the current Ukrainian authorities, while fighting was underway in Donbas.

"A whole network of protest groups, clearly coordinated from Moscow, was created on the Internet. But the attempt was thwarted," Kharchenko said.

According to him, during the second stage, bloggers with openly pro-Russian orientation became active on Youtube and Facebook. At the same time, a quasi media outlet spreading Russian propaganda was created for such a blogger.

The third stage, he said, was the emergence and active development of the Telegram messenger in Ukraine, which first appeared in Russia and was allegedly even subject to prosecution there.

"An operation to import Telegram into Ukraine started a year ago. A significant number of anonymous network channels were created, and a huge amount of money was invested in removing anonymous content from Telegram into mainstream media," Kharchenko said.

He added that the main feature of the channel was complete anonymity and high audience targeting, which made it possible to bring manipulation to a completely new level.

Kharchenko told international colleagues that the problem of fake news and disinformation, after the beginning of Russian aggression, has become so acute for Ukraine that this caused a natural need for special projects, the most striking of which was StopFake.