Ukraine completes the ratification of the Istanbul Convention 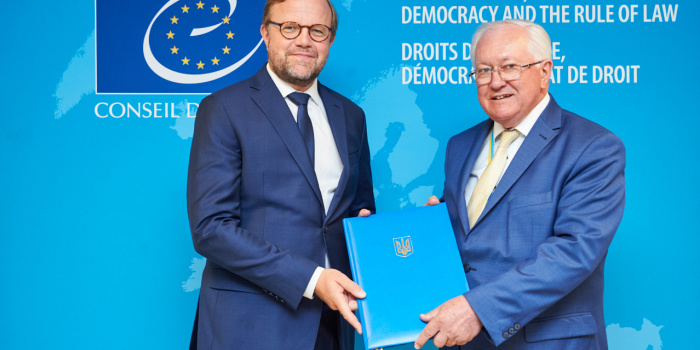 Ukraine officially completed the ratification of the Istanbul Convention, handing over the according documents to the Deputy Secretary General of the Council of Europe, Bjorn Berge.

This was announced on Twitter by the Secretary General of the Council of Europe Marija Pejcinovic Buric, reports Ukrinform.

"I warmly welcome Ukraine’s deposit today of the instrument of ratification of the Council of Europe's Istanbul Convention," Pejcinovic Buric said.

According to her, Ukraine became the 36th participant country to this landmark treaty.

According the Council of Europe's website, the Convention will enter into force for Ukraine on November 1, 2022.

As IMI reported, on June 20, the Verkhovna Rada ratified the Council of Europe Convention on the Prevention of Violence against Women and Domestic Violence (Istanbul Convention). On June 21, the ratification document was signed by President Volodymyr Zelensky.

The Istanbul Convention is an international treaty dedicated to combating violence against women and domestic violence. This document is aimed at preventing acts of violence, protecting and supporting the victims, and bringing the perpetrators to justice. The Convention establishes criminal responsibility for all forms of violence (psychological, physical, sexual, and economic).

The Council of Europe developed it back in 2011 in Istanbul (which is why the convention is called the "Istanbul Convention"), it comes into effect after the national parliament ratifies it and according adjustments are made to national legislation. Ratification of the treaty entails changes in legislation and additional funding to address the problem of domestic violence.