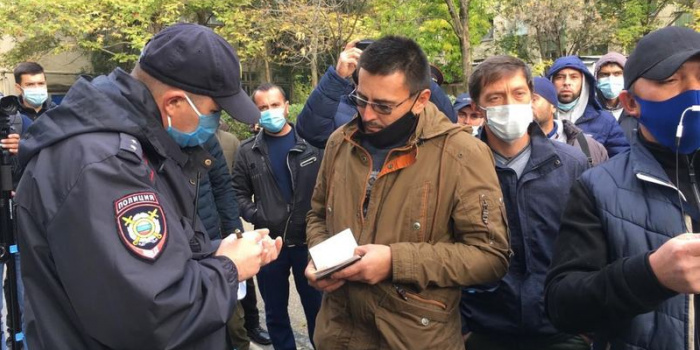 They were brought to the “Central” police station in Simferopol.

According to the lawyer Rustem Kyamilev, the most probable scenario is that all detainees would be charged with Art. 20.2 of the Administrative Code (violation of the established procedure for holding mass events).

The journalists had been in the building of the Crimean Garrison Military Court, performing their professional duties and having an editorial task from the Grani.Ru editorial office. They were instructed to prepare a report on the verdict announced at the court hearing in the criminal case of the Red Guard group "Hizb ut-Tahrir" - Rustem Emiruseinov, Arsen Abkhairov and Eskender Abdulganiev.

On November 4, the Southern District Military Court convicted the participants of the "Red Guard group" case: Rustem Emiruseinov was sentenced to 17 years in prison, Arsen Abkhairov got 13 years and Eskender Abdulganiev got 12 years in prison.