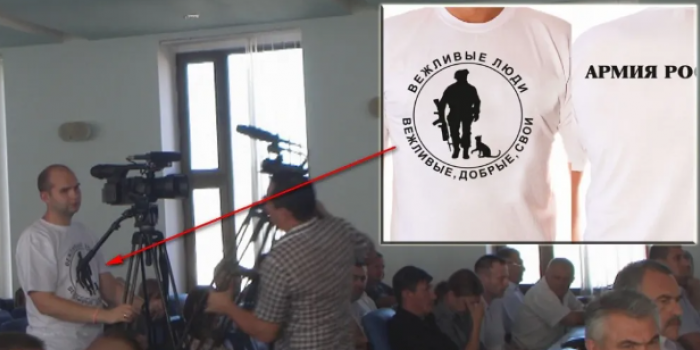 Kateryna Vesko, the wife of Artem Vesko, Rada TV channel's award-winning correspondent in Luhansk oblast, who had worn a "Polite People" T-shirt, claims that her husband did not know what the print on the T-shirt meant.

Vesko's wife (who was also awarded by President's decree as a correspondent of the Rada channel) confirmed that her husband had received the Order.

According to her, they "didn't really understand what was going on in Crimea" back then.

"We didn't really understand what was going on in Crimea. He [Artem] wore this T-shirt for a whole day until one person recognized it as something similar [to a separatist logo]. Well, back then no one knew what this T-shirt meant. It cost us a lot of nerves, we had many talks with the SBU. That's how it turned out," Kateryna said, explaining the print on the T-shirt.

Albina Kusheleva, head of communications department at the Luhansk RMA, clarified that "until May, Vesko was in Lysychansk and made reports for the national telethon twice a day." The (board) meeting of the State Committee for Television and Radio Broadcasting recommended giving Veska the award. The letter that went with the award, which is at the media outlet's disposal, had been signed by the Kinokit director Serhiy Samoilenko (the company cooperates with the TV channel "Rada").

Vesko himself responded to the media outlet's request to comment on the award by suggesting they turn to the Rada channel. The media outlet has sent a request there and is waiting for a response.

As IMI reported, on August 23, the President of Ukraine Volodymyr Zelensky awarded several media persons on the occasion of Independence Day. Namely, five journalists from Luhansk oblast received awards. Artem Vesko, who is currently a correspondent for Rada TV channel, was awarded the Order of Merit III degree. Vesko was received the award "for significant merits in strengthening the Ukrainian statehood, the courage and selflessness shown while protecting of the sovereignty and the territorial integrity of Ukraine, significant personal contribution to the development of various spheres of public life, for defending our state's national interests, and diligence in performing one's professional duties."

On August 29, Luhansk journalists expressed their outrage with the fact that Artem Vesko, Rada TV channel's correspondent in Luhansk oblast, had received a state award on the occasion of Independence Day. The journalists recall 2016, when Artem Vesko got caught up in a scandal. Back then, he attended a session of the Lysychansk City Council wearing a T-shirt with the separatist logo "Polite People."