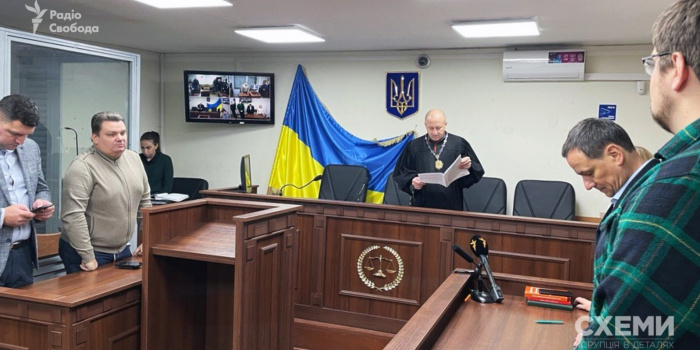 IMI lawyer Roman Holovenko considers the court-appointed punishment for the Ukreximbank employees accused of attacking Skhemy journalists to be mild.

"The punishments imposed by the court in the Metzher case really seem to be mild. The fines in this verdict are comparable in size with fines for some administrative offenses. Of course, the court can take into account any mitigating circumstances regarding the defendants (Part 2 of Art. 66 of the Criminal Code), and the criminal record will remain a stain on their biographies. However, considering that such a mild punishment was what the prosecution demanded, we advise the journalists who have become victims in similar cases to carefully monitor the course of their criminal proceedings and to inform the media community as soon as the intention to demand a seemingly inadequate punishment for the incriminated act becomes known," the lawyer said.

As reported by IMI, on September 14, the Holosiivsky District Court of Kyiv imposed a fine on three Ukreximbank employees accused of attacking Skhemy journalists Kyrylo Ovsyany and Oleksandr Mazur.

Volodymyr Pikalov, head of Ukreximbank's information policy department, is also accused in the case, but he has been drafted into the army. The court will make the decision regarding him later.

The journalists' attorney Anatoliy Popov said that the victims were contesting the closing of the criminal proceedings under the most serious article, 146 of the Criminal Code ("Illegal deprivation of freedom or abduction of a person"), which provides for restriction of freedom for a term of up to three years or imprisonment for the same term.

On October 4, 2021, in Kyiv, employees of the state-owned Ukreximbank attacked Skhemy filming crew during the recording of an interview with the financial institution's board chairman Yevhen Metzher right in his office. Being asked about a loan to structures related to the "DPR," Metzher ordered to take away the journalists' cameras, destroy the video recordings of the interview, and prohibit further filming. In addition, the journalists were illegally detained in the office premises, not being allowed to leave it. Ihor Telbizov applied force against the journalists.

The actions of the former board chairman of the bank Yevhen Metzger and his press secretary have been qualified under Article 171 of the Criminal Code ("Illegal seizure of materials collected by a journalist and their and technical equipment, obstruction of the work of a journalist committed by an official abusing their official position").

The actions of Ihor Telbizov and Oleh Osipov have been classified under two criminal articles – the same Article 171 and Article 121 ("Deliberate violent actions that caused physical pain and did not cause bodily harm").