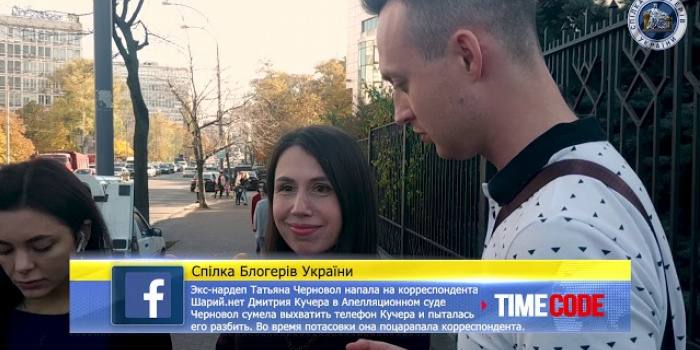 The investigators of the territorial administration of the State Bureau of Investigation (SBI) in Kyiv pressed suspicion to a MP of the 8th convocation (from “Narodnyy Front” faction) Tetyana Chrnovol, charging her for obstruction of legitimate professional activity of the journalist (Part 1 of Article 171 of the Criminal Code of Ukraine), as to SBI website.

“Investigation has found that on October 18, 2019, a former Member of Parliament impeded the work of a journalist, as he was covering court hearings. The suspect seized the phone of a mass media professional and stopped video recording, ” the message reads.

The Prosecutor General’s Office is charged to take under its control the pre-trial investigation in criminal proceedings. If proven guilty, the MP faces a fine of up to 850 hryvnias (around $ 34), or arrest up to six months, or imprisonment for up to three years.

The incident happened at the sitting of the Administrative Court of Appeal of Kyiv, where the judge was to decide what level of restriction to choose for the MP from “Narodny Front” faction Serhiy Pashinsky to choose.

The victim is Dmytro Kucher, who works for the edition “Pravovyy Kontrol Ukraina” (Legal Control of Ukraine)which is related to pro-Russian blogger Anatoly Shariy.

As IMI reported, on December 24, 2019, Police have instituted criminal proceedings over the incidents involving journalists for Shariy.net and Strana.ua at the Kyiv Court of Appeal on December 24, as it was reported on the website of the National Police of Ukraine.

Investigators categorized the incident as a threat or violence against journalists and filed to the Unified Register of Pre-trial Investigations under Part 2 of Art. 345-1 of the Criminal Code of Ukraine.

According to LB.ua, the colleagues of the pro-Russian blogger Anatoly Shariy were expelled from the courtroom, where the judge considered the appeal of the suspect in the murder of Pavel Sheremet Yulia Kuzmenko.

IMI issued a statement demanding that the police investigate all attacks against the mass media, not just against Shariy and strana.ua. " We consider it inadmissible that the police have selective response to violations of journalists' rights and we require the Ministry of Internal Affairs to formally and publicly respond to all cases of attacks against the journalists.," the statement said.