Police probes into incident in courtroom involving journalists for Shariy.net and Strana.ua 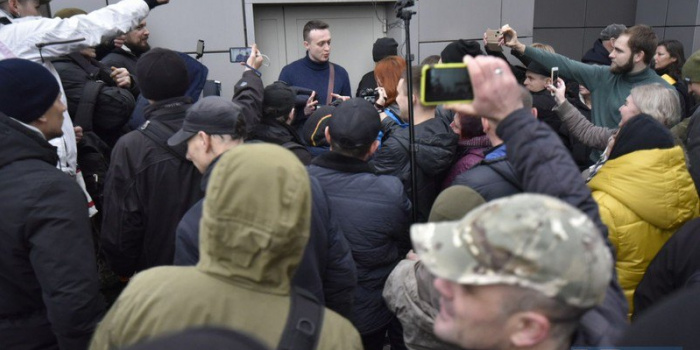 Police have instituted criminal proceedings over the incidents involving journalists for Shari.net and Stran.ua at the Kyiv Court of Appeal on December 24, as it was reported on the website of the National Police of Ukraine.

Investigators categorized the incident as a threat or violence against journalists and filed to the Unified Register of Pre-trial Investigations under Part 2 of Art. 345-1 of the Criminal Code of Ukraine.

According to LB.ua, the colleagues of the pro-Russian blogger Anatoly Shariy were expelled from the courtroom, where the judge considered the appeal of the suspect in the murder of Pavel Sheremet Yulia Kuzmenko.

“Antonina Beloglazova and Dmytro Kucher were expelled from the Court of Appeal, and Kucher was also forced to shout anti-Russian slogans. Following this incident, journalists colleagues of Shariy filed complaint to the police. They found it was a fact of pressure, ” the newspaper reported.

“When I was leaving the courthouse, a woman shouted at me 'Journalist with Shariy!' I was immediately surrounded by 50 persons from Yulia Kuzmenko's support group. They threatened me, asked some stupid questions. An unknown man kicked me three times to the leg. Another spilled urine on me, ” Kucher wrote on his Facebook page.

According to Hromadske , Kuzmenko's supporters also tried to get out of the courtroom the journalist with "Strana.ua" Yulia Korzun.

The police said: “Such unlawful behavior towards journalists is unacceptable. In all such cases, the police will respond promptly within the current legislation. ”

To remind, Shariy.Net is a project of pro-Russian blogger Anatoly Sharii, who is currently living abroad.