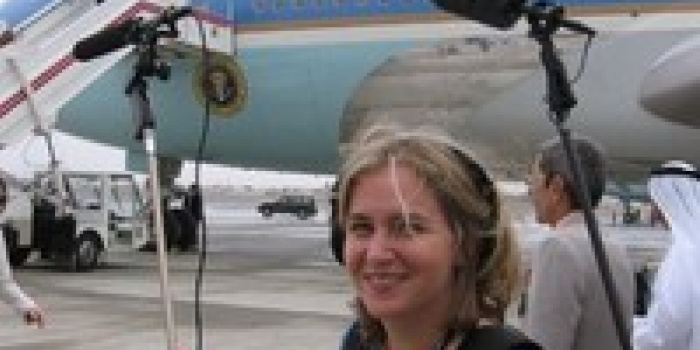 Secretary of State Mike Pompeo appears to be escalating his criticism of NPR — this time not just with words but with actions. On Monday NPR reporter Michele Kelemen was notified that she was being removed from the press pool covering Pompeo's upcoming trip to the United Kingdom, Ukraine, Belarus, Kazakhstan, and Uzbekistan, as CNN reported.

The sudden change came just a few days after the top US diplomat responded angrily to an interviewer from the public radio outlet.
That interviewer, Mary Louise Kelly asked Pompeo a series of pertinent questions about Ukraine. Pompeo responded by saying he expected the interview to be about Iran. Kelly said she always intended to ask about both subjects, and that Pompeo's staff knew so ahead of time.
According to Kelly, Pompeo shouted and cursed at her after the interview ended. Pompeo did not deny that, but he called Kelly a "liar" and accused her of violating an off-the-record agreement. Kelly and NPR said she did not do that, and dozens of journalists came to her defense.
Kelly said Pompeo also questioned her intelligence by directing her to identify Ukraine on a blank map of the world. An aide fetched the map for Pompeo. Kelly, who has a Master's degree in European studies, said she pointed to Ukraine, and Pompeo moved on. In a statement the next day, he implied (without outright claiming) that she actually pointed to Bangladesh, a country thousands of miles away. Kelly's colleagues thought the insinuation was laughable.
Over the weekend, NPR CEO John Lansing said the news outlet "will not be intimidated" by the Secretary of State.
On Monday, the action involving Kelemen was publicly announced by the State Department Correspondents' Association, a group that represents members of the diplomatic press corps.
The association said it "protests the decision to remove NPR correspondent Michele Kelemen from Secretary Pompeo's plane on his upcoming trip to Europe and Central Asia."
"The removal of Michele, who was in rotation as the radio pool reporter, comes days after Secretary Pompeo harshly criticized the work of an NPR host. We can only conclude that the State Department is retaliating against National Public Radio as a result of this exchange," the association's president Shaun Tandon said.
"The State Department press corps has a long tradition of accompanying secretaries of state on their travels and we find it unacceptable to punish an individual member of our association," Tandon added.
CNN has reached out to the State Department for comment on why NPR was removed from the trip.
On Monday night NPR confirmed the disruption to Kelemen's plans but declined to comment on what action the news outlet might be taking.
"Michele Kelemen was informed that she would not be traveling. She was not given a reason," a NPR spokeswoman said.
Kelemen's colleagues expressed support for her on Monday evening. Steve Inskeep called her "a deeply experienced foreign correspondent" and "one of the best colleagues I've ever worked with."
"She's thoughtful, honest, gracious and tough," Inskeep tweeted. "Also, just got banned from Sec. Pompeo's plane."
CNN
Liked the article?
Help us be even more cool!
Other news