Sentsov got his National T. Shevchenko Prize, awarded in 2016 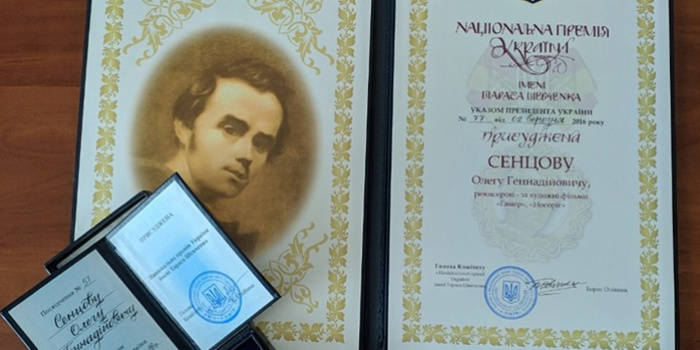 The Ukrainian director Oleg Sentsov released from Russian custody received the Taras Shevchenko National Prize, awarded in 2016 to him, as Radio Liberty reported.

“The meeting of the chairman of the committee, writer Yury Shcherbak with the winner of the National Award 2016, film director Oleg Sentsov took place at the Shevchenko Committee,” the message reads.

In 2016, Sentsov, who was in a Russian colony at the time, was awarded the Taras Shevchenko National Award in the Cinematography category for the films “Gamer” and “Rhinoceros” (not finished work).

The National Union of Journalists of Ukraine, nominating Sentsov's cinematographic works for the prize, pointed to his civic stance in the issues of preserving the territorial integrity of Ukraine, asserting the rights and freedoms of the population of the Autonomous Republic of Crimea, condemning the annexation of the peninsula by Russia, promoting democracy in Ukrainian society.

As IMI reported, on September 7, Ukraine exchanged prisoners with Russia in the format "35 by 35". Twenty-four POWs and political prisoners have returned to Ukraine , including director Oleg Sentsov and journalist Roman Sushchenko.

On September 10, Oleg Sentsov held the first press conference after his release, at which he announced that he planned to stay in Kiev.