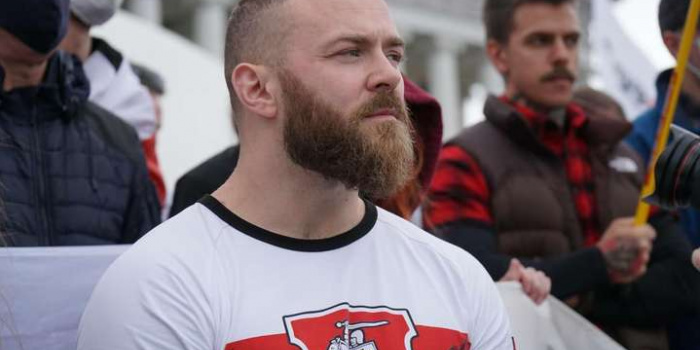 The Security Service of Ukraine (SBU) has banned the entry into Ukraine to an ally of Vitaliy Shyshov, deputy head of the "Belarusian House in Ukraine" Rodion Batulin. Law enforcers found that Rodion Batuline could pose a threat to national security of Ukraine as SBU press service said commenting it on to Detektor Media online edition.

The ban was issued on July 23, based on some "substantiated data that this person may pose a threat to the national security of Ukraine."

"Rodion Batulin is known for his radical opinions and provocative actions during protests in Ukraine. During these actions, among other things, it was possible to prevent attempts by radicals to provoke violent clashes with law enforcement officers, ” the agency said.

On August 4, the Belarusian House in Ukraine NGO reported that Rodion Batulin, its deputy head, was barred from entering Ukraine for term of three years.

Rodion Batulin interrupted his trip abroad after the news of the death of the head of the NGO Vitaliy Shyshov, but was unable to enter Ukraine at the Ustyluh border checkpoint (Volyn region). The NGO noted that the reason for the ban was unknown to border guards.

Rodion Batulin is an associate of Vitaliy Shyshov, the head of the Belarusian House in Ukraine NGO, who was found hanged in a park in Kyiv on August 3. It is known that Batulin is allied with Serhiy Korotkykh, who as a member of the Azov Battalion took part in the fighting in Donbas and obtained Ukrainian citizenship.

Rodion Batulin is also a mixed martial arts fighter, he previously played for Belarus. In 2019, Batulin was involved in an attack on the car of the fifth President of Ukraine Petro Poroshenko near the SBI office.

As IMI reported, As IMI reported, on August 3, Vitaliy Shyshov, the head of the “Belarusian House in Ukraine”, who went missing on the morning of August 2, was found hanged in a park in Kyiv.

On August 3, National Police Chief Ihor Klymenko said police had two main versions of the death of Vitaliy Shyshov, head of the “Belarusian House in Ukraine”, a suicide or premeditated murder disguised as suicide