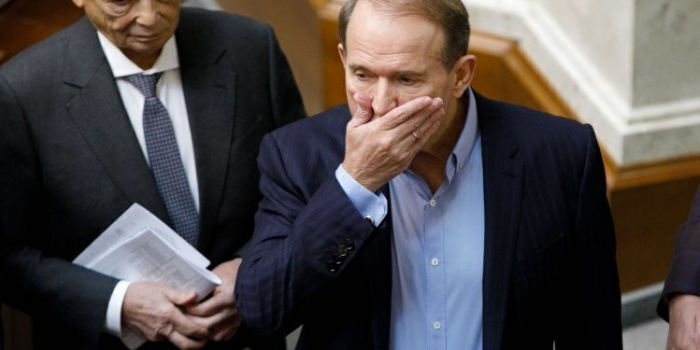 On June 24, the Security Service of Ukraine (SBU) and the State Bureau of Investigation (SBI) are performing several investigative measures into a case regarding Viktor Medvedchuk and Taras Kozak, members of the Opposition Platform for Life faction, as Interfax-Ukraine reported.

"Investigators of the Security Service of Ukraine and the State Bureau of Investigations are carrying out some operational and investigative actions in the framework of criminal proceedings, in which MPs Medvedchuk and Kozak have been reportedly suspected," the SBU said.

Details of the investigation are expected to be released later.

As IMI reported,  on March 25, the SBU reported to have been probing into the actions of representatives of the NGO “Ukrainian Choice”, under suspicion of contributing to illegal referendum and elections in the temporarily occupied Crimea and Sevastopol in 2014.

The SBU conducts investigative actions within the framework of the initiated criminal proceedings under Art. 366 (official forgery) of the Criminal code of Ukraine. The issue of notifying participants of suspicions under Art. 110 (encroachment on the territorial integrity and inviolability of Ukraine) and Art. 111 (treason).

On the morning of March 25, Ukrainian media reported that the SBU was conducting searches at the office of the “Ukrainian Choice” NGO.

“Ukrainian Choice” is a non-governmental organization established in April 2012 by Viktor Medvedchuk, a politician and current member of the Verkhovna Rada from the OPFL.

On the same day, Prosecutor General Iryna Venediktova and Head of the Security Service of Ukraine Ivan Bakanov said that the MPs Viktor Medvedchuk and Taras Kozak were suspected in helping on Russia in its subversive activities against Ukraine, namely by waging an information war.

On May 18, the MP Renat Kuzmin said that Viktor Medvedchuk's lawyers had filed an appeal against the decision of the Pechersk District Court of Kyiv, which decided to place him under 24-hour house arrest until July 9.

The Prosecutor General's Office appealed against the precautionary measure taken by Viktor Medvedchuk.

On February 2, as IMI reported, on February 2, Volodymyr Zelensky has enacted the National Security and Defense Council decision of February 2, 2021 on the application of sanctions against MP Taras Kozak and television channels 112 Ukraine, NewsOne, and ZIK, the press service of the President's Office has reported.