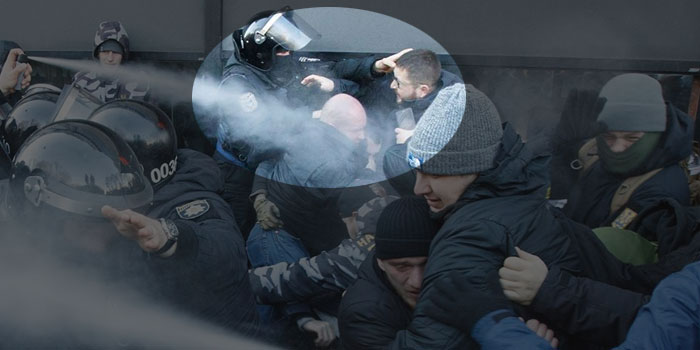 The State Bureau of Investigation has not found grounds to investigate into the incident involving physical force used against the photographer with Radio Liberty. Serhiy Nuzhnenko lodged complaint to the SBI saying the security officers injured him, as he was taking pictures of the clashes near the Verkhovna Rada on December 17, 2019, as Radio Free Europe/Radio Liberty reported..

"The Territorial Department of the State Bureau of Investigation, located in Kyiv, considered the verbal statement of Nuzhnenko S. of 17.12.2019 on alleged misconduct by law enforcement officers. Having checked the facts indicated in the available materials, it has been established that actually, there are no grounds to enter report to the National register of pre-trial investigations, as the applicant was informed of, "- the SBI replied to Radio Liberty.

On December 19, 2019, the spokesperson of the Kyiv Pechersk Regional Police Department, Ksenia Tyshchenko, told Detector Media that the police would submit the case papers over the incident to the SBI "for an objective investigation." Commenting on, the SBI spokesperson Angelika Ivanova denied to confirm or to refute this report.

As IMI reported, on December 17, 2019 in Kiev, the National Guard and police officers broke the camera and glasses of the journalist for Radio Svoboda Serhiy Nuzhnenko. The incident occurred, as the journalist was covering clashes between the law enforcement officers and protesters under the Verkhovna Rada due to new bill on farmland market to be voted in the parliament.  On December 19, the Verkhovna Rada plans to consider the bill on introduction of the land market in the second reading.

Besides that, on December 17, 2019 , other journalists, from Hromadske Victoriya Roshchyna and cameraman Oleksiy Nikulin, got injured amid these clashes. In particular, the journalists suffered from tear gas, which was used by the riot police and protesters. Also someone knocked out the phone from the hands of the journalist, as she was filming the clashes. The protesters threw the tent bars at the journalists.