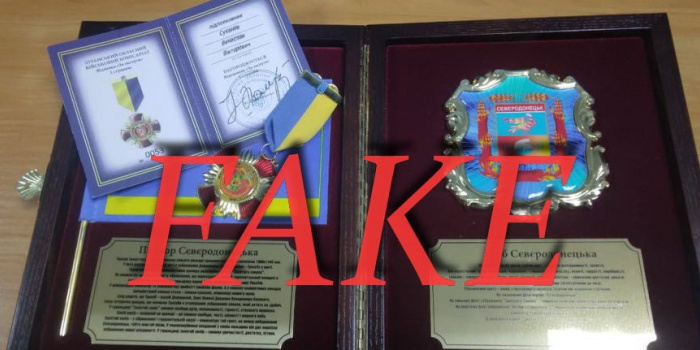 The russian occupiers are spreading fake news about the death of UAF officers using awards stolen from the commander of the 111th independent brigade of the Territorial Defense of Luhansk region Vyacheslav Sukhanov.

The head of the Luhansk regional military administration Serhiy Haidai reported about it.

"It's nonsense. As evidence, they show photos of our defenders' documents. But, for example, the commander of the 111th independent brigade of the Territorial Defense of the Luhansk region Vyacheslav Sukhanov probably knows that russian soldiers settled in his apartment in the occupied part of Rubizhne. That's why they have access to the officer's awards. Moreover, those were given to him back when he was a lieutenant colonel. The russians cannot advance on the front, they do not have victories, and they need to report something to their superiors. That is why such cheap 'victories' are born. Because there is nothing to get paid for: the Armed Forces of Ukraine turned out to be stronger than the three days calculated by the enemy," Haidai said.

It should be noted that this is not the first time that russians use documents of Ukrainian fighters in their fakes. Namely, in January 2018, paratroopers of the so-called "Luhansk People's Republic" announced that they had found a hideout with personal belongings of Ukrainian soldiers. The Luhansk-24 Internet resource controlled by the paratroopers wrote about this.

At that time, the LPR group claimed that the hideout had been found near the town of Krasnyi Luch (Khrustalnyi after the decommunization), and it had allegedly been created in August 2014.

The published photos included weapons and documents, as well as a photocopy of the list of UAF servicemen with their phone numbers. Among them are a military ticket under the name of Oleksiy Hartramf and an ensign's ID under the name of Dmytro Yatsenko.

Dmytro Yatsenko is known to have been captured by paratroopers in the Luhansk region on August 8, 2014. He was a soldier of the 24th Motorized Infantry Brigade. The Center for the Release of Prisoners wrote that he was on the list of prisoners.

Border guard Oleksiy Hartramf has also been captured in 2014. It is unknown when and under what circumstances he returned to the territory controlled by Ukraine.

According to the paratroopers, the hideout was created in August 2014. At that time, Krasny Luch was allegedly controlled by the Ukrainian authorities. In fact, the city was occupied in the spring of 2014 and remains under occupation to this day, although in the summer of 2014 there were attempts to liberate the city.