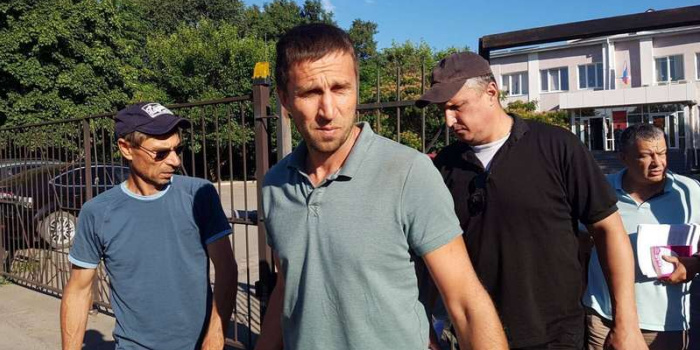 russian security forces offered Roland Osmanov, a citizen journalist from occupied Crimea, to record a video address in support of the russian army.

He said this after a three-day administrative arrest, Crimean Solidarity reports.

According to Osmanov, representatives of the "E" Center offered him to record such a video during his detention. For this, they promised not to open a protocol against him for disobeying police officers. Osmanov refused.

Earlier, the russian-controlled Zaliznychny Court of Simferopol found Osmanov guilty of disobeying the demands of a police officer and arrested him for three days. The russian security forces claimed that he allegedly resisted during the detention by "pushing the police away, filming them, and obstructing their work." Osmanov himself said that he immediately agreed to go to the department with Ruslan Shambazov, head of the CCE department, asking only why he was being detained.

"At that time, two more members of the security forces, wearing masks and uniforms, walked behind me, pounced on me, knocked me to the floor, handcuffed me and pushed me into a minibus that was standing nearby. All this happened in an extremely rude manner," Osmanov said.

At the police, he was informed that he was accused of discrediting the russian army. This was about a repost of russian lawyer Nikolai Polozov's post, who had called the russian army's bombing of Ukrainian cities fascism, Crimean Solidarity clarified.

Osmanov is currently awaiting trial on the second charge of discrediting the russian army, which will be heard in the russian-controlled Kyiv District Court. He noted that publicity in the media and the public response helps in the case of such abductions, as law enforcement officers monitor the public's reaction.

Rolan Osmanov is a Crimean activist and citizen journalist. Previously, he took part in a picket near the Khan's Palace, protesting against its demolishing under the guise of restoration.

As IMI reported, on July 13 in the occupied Crimea, the russian security forces detained Crimean Tatar blogger and public activist Rolan Osmanov near the building of the "Supreme Court," where the trial in the case of Nariman Dzhelial was taking place. He was sententced to three days of administrative arrest for allegedly "failing to comply with the legal demands of police officers."