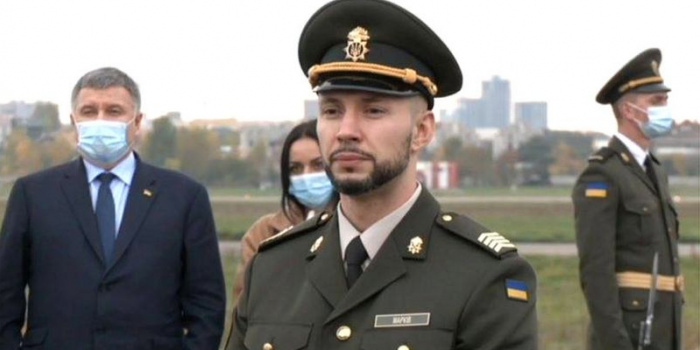 “A decision was made to charge Markiv with committing a crime under Art. "f", "h", "j" part 2 of Art. 105 of the Criminal Code, the responsibility for which entails life imprisonment, "- the report read.

The Russian investigation put Markiv on international wanted list, and the court, at the request of the investigation, chose a measure of restraint in the form of detention in absentia.

According to the Russian investigation, on May 24, 2014, near Slovyansk (Donetsk region), Markiv handed over to the command the coordinates of Russian citizen Andrei Mironov, Italian photojournalist Andrea Rockelli and French journalist William Roguelon for the artillery strike.

The investigator noted that the journalist and his translator had arrived to take pictures and were walking in the direction of the railway crossing in the village of Andriyivka, and Markiv allegedly opened fire with a Kalashnikov assault rifle, so that they could not flee until the artillery shelling began.

As IMI reported, on December 11, the Basmanny court in Moscow (Russia) authorized the arrest in absentia of Ukrainian soldier Vitaliy Markiv in the murder case, for which he was acquitted by a court in Italy. The criminal case against Markiv concerns the events of 2014, when Italian reporter Andrea Rockelli and his translator, Russian Andrey Mironov, were killed by mortar fire near the village of Andriyivka near Slovyansk.

The Ministry of Internal Affairs of Ukraine considers the sanction of the Russian Federation on the arrest of Vitaliy Markiv in absentia asa propaganda campaign against Ukraine and its defenders.

On November, IMI reported, the National Guard Vitaliy Markiv is going to apply to the European Court of Human Rights for his three-year detention in Italy.

On November 4, Vitaliy Markiv, who was acquitted by an appellate court in Italy, returned to Ukraine.

On November 3, the Milan Court of Appeals acquitted Vitaliy Markiv, who was sentenced to 24 years in prison on charges of complicity in the 2014 premeditated murder of Italian journalist Andrea Rockelli in Donbas.

On October 15, the Milan Court of Appeals accepted a new translation of the words of National Guard Vitaliy Markiv about the death of Italian reporter Andrea Rockelli. It is about the phrase " killed a journalist", which they recorded while eaversdroping of Markiv in a pre-trial detention center and tried to interpret as "I killed".

According to a new translation of Vitaly Markiv's conversation with a cellmate in July 2017, he did not say: "We killed the reporter", but said: "In 2014, an Italian reporter was killed, and now they want to put the blame on me."

On October 1, the Milan Court of Appeals ordered additional examinations in the case of Ukrainian National Guard Vitaliy Markiv.

On September 29, an appeal in his case began in Milan.

On June 5, 2020, during a report to the Verkhovna Rada, Interior Minister Arsen Avakov said that an investigative experiment conducted by the Ministry of Internal Affairs of Ukraine in the case of Vitaliy Markiv proved his innocence.

In May 2020, in Slovyansk (Donetsk region), a group of experts conducted an investigative experiment in the criminal proceedings of the National Police about the circumstances of the deaths of Italian photojournalist Andrea Rockelli and Russian translator Andrei Mironov. Preliminary findings indicated that the shots had been fired from a place controlled by the militia.

Vitaliy Markiv, a citizen of Ukraine and Italy, was arrested on June 30, 2017 at Bologna Airport. He had been accused of complicity in murder of Italian photojournalist Andrea Rockelli and Russian translator Andrei Mironov in a shooting near Slovyansk on May 24, 2014.

The military denied the allegations. His lawyer Rafaelle Della Valle considered the accusations against Vitaly Markiv baseless and the biased. Ukraine also denied complicity of a National Guard soldier in the violent death of an Italian reporter.

The prosecution - the parents of the deceased, Italian journalists' organizations - insisted on the version of the premeditated murder of a photojournalist during the war in Donbass.