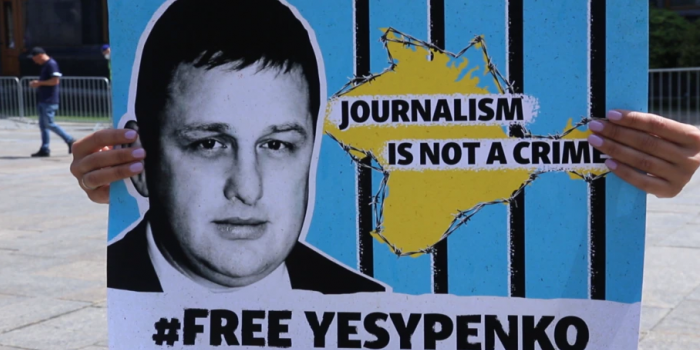 The sentence to Vladyslav Yesypenko, a freelancer for Krym.Realii (RFE/RL) is a  mockery of justice, as Reporters Without Borders (RSF) said about the sentence to the journalist issued by controlled by Russia Simferopol District Court, as Radio Svoboda reported.

The human rights organization denounced Yesypenko's detention as such made on "baseless charges" and demanded his immediate release.

“RSF condemns a mockery of justice after a #Russia-controlled Court in #Crimea sentenced #Russian🇷🇺-#Ukrainian🇺🇦 reporter Vladyslav Yesypenko to 6 years in jail for alleged "possession of explosives". Detained on baseless charges & tortured, he must be released now! #FreeYesypenko", RSF said on its official Twitter page.

The European Federation of Journalists (EFJ) found Yesypenko's sentence to be a "parody of justice".

" We condemn a parody of justice. Yesypenko has been detained on baseless charges and tortured. He must be released now! We call on the Russian Federation to end the persecution of the other professional and citizen journalists illegally detained. Furthermore, the EFJ/IFJ urges international organisations such as OSCE, Council of Europe and UNESCO to react firmly and demand Russia to respect the press freedom and journalistic work,” added EFJ General Secretary Ricardo Gutiérrez, ” said EFJ Secretary General Ricardo Gutierrez.

As IMI reported, on February 16 The Simferopol district court controlled by Russia sentenced the freelancer for Krym.Realii (RFE/RL) Vladyslav Yesypenko to 6 years in a penal colony. Russian judge Dlyaver Berberov also fined the journalist 110,000 rubles (about $1 464).