Rivne media person gets into a drunken car accident 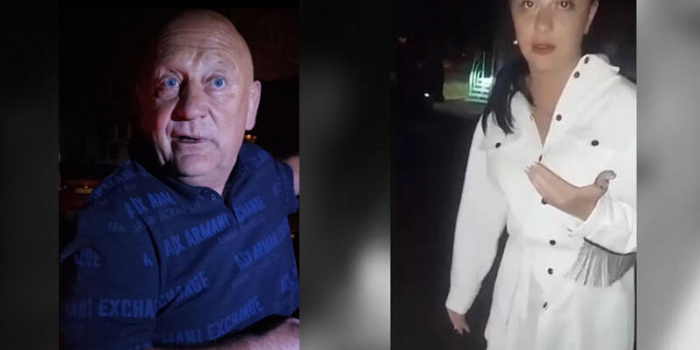 In Rivne, on May 21 at 22 o'clock, former journalist turned PR manager Olha Ferrar got into a car accident together with a regional council deputy Oleksandr Danilchuk. Both were intoxicated at the time of the incident. Their behavior at the scene has been filmed, and the video was later released.

According to the newspaper, the accident happened near "Gusto" cafe on Mazepa Street. Olha Ferrar, a Toyota Land Cruiser driver, backed up and crashed into a Honda Accord car, damaging a headlight and the bumper. Next to her in the car was the ex-chairman of the Rivne regional council, now a regional council deputy from the "Strength and Honor" party Alexander Danilchuk, the owner of the car, also drunk. The damaged Honda belongs to Rivne District Prosecutor's Office employee Olha Lykhach. Her husband made a video recording of the conversation that took place between the accident and the arrival of the police.

The video shows a dispute between the parties to the conflict. They are figuring out who is to blame for the accident:

Ferrar: Wait, what is it?

Danilchuk: Can you get in the car?

Oleksandr Danilchuk finally stated: "Who will accept your proof? We were leaving, and you were leaving, you will not prove anything to anyone. And I am the king in this region (this is the pseudonym of Oleksandr Danilchuk, who has been a top rank politician under different administrations. – Ed.). I've been this region's chairman five times, you know. I will win all the courts, so you know."

In a conversation with the publication, Olha Ferrar said that she had not been drunk and had not been driving anywhere. Danilchuk is her "very close friend, a friend not only in life." Confirmed that this is the car he used.

Due to the accident, protocols on Olha Ferrar as the Land Cruiser's driver were drawn up under three articles, one of which is driving while intoxicated (130 of the Code of Administrative Offenses). She refused to be examined. During martial law, this article provides grounds for the seizure of a car for the needs of the Armed Forces.

The other two articles which were also attributed to Ferrar are part 1 of Article 126 (did not show or did not have documents for driving a car) and Article 124 (violation of traffic rules, which caused damage to vehicles).

Oleksandr Polishchuk, a spokesman for the Rivne Regional Military Administration, commented on the situation while speaking to the publication: "The driver is facing charges under Article 130. The car has been seized. As was the case with hundreds of other cars confiscated from drunk drivers. In Rivne region, everyone are equal before the law. There are no exceptions."

After the incident, Danilchuk did not admit that he was the owner of the car and said that he had "no" relationship with Ferrar. Olha Ferrar told reporters that she had not been drunk and had not been driving anywhere. And later on her Facebook page she admitted her guilt: “I am ready to face full accountability and I am already facing it. Please do not add any facts that did not happen with your imagination. Please, understand that I made a mistake. We all make mistakes. My mistake was more than big. Don't beat me down further, because I can't bear it."

As you know, Danilchuk's Toyota has been confiscated for the needs of the army, as it has been done previously in similar cases.

We remind that last year, unknown persons damaged Olha Ferrar's car. She believed the incident had to do with her journalist work, which she then had been performing for Rivne.Online.

In the 2020 local elections, Olha Ferrar ran for the regional council from the Batkivshchyna party. Her biography submitted to the CEC in September states that Olha Ferrar works as PR manager at ZakhidTransbud LLC. This company belonged to a Rivne mayor candidate (now the secretary of the city council) Viktor Shakirzyan, and she has admitted receiving support from him in the election on social media.