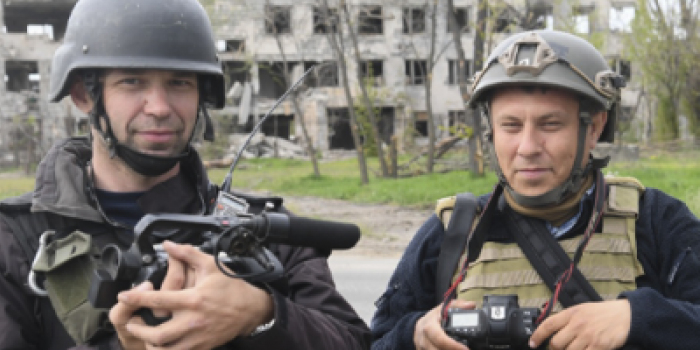 Ukrainian journalists Oleksandr Yermochenko and Pavlo Klimov, who work for the international news agency Reuters, have become finalists of the Rory Peck Awards 2022. This is announced on the Rory Peck Trust website.

Yermochenko and Klimov became finalists of the News Award. All the finalists will be celebrated at the Awards ceremony on November 16th with one overall winner from each of the four categories announced on the night.

This Award recognises the work of freelance journalists in the video coverage of a news event where the focus is on the immediacy of the story.

The post about Oleksandr and Pavlo says they operate as a team, switching between photography and video, interviewing, and producing. Their storytelling spans the full range of the drama that unfolded in the east of Ukraine and hit a peak with the siege of the Azovstal plant in Mariupol.

"Their work is one of the few sources of independent coverage in the region. Where many news organisations are allowed in on supervised facilities, they have manged to work independently," the post says.

It will be recalled that Reuters journalists Oleksandr Yermochenko and Pavlo Klimov have come under fire and were wounded near Severodonetsk in June. Their driver was killed. They were traveling in a car provided by the Russian-backed militants, driven by a person they assigned. In addition, they were driving on the Russian-controlled section of the road between Severodonetsk and Rubizhne city.

At the same time, Reuters journalist Serhiy Karaziy told IMI that these two journalists work in compliance with professional and Reuters standards.

"These are our colleagues who have been working there since 2012, since Euro 2012. They are Donetsk residents, citizens of Ukraine, have Ukrainian passports, and work for us," Karaziy said.

When asked whether getting objective information on the occupied territories is possible, Serhiy Karaziy remarked: "It is possible if these people work for Reuters." However, he stresses that it is very difficult to obtain such information.