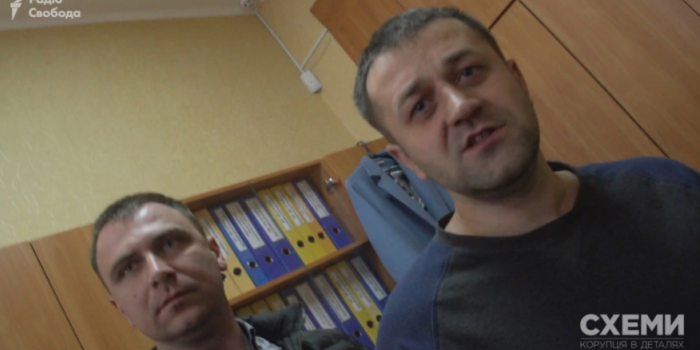 On May 30, the Brovary District Prosecutor's Office issued a suspicion notice to a lawyer for attacking the cameraman of the journalist investigation program "Skhemy" (Radio Liberty) Borys Trotsenko in Chabany (Kyiv region) in March of 2019.

This was announced by the Kyiv Regional Prosecutor's Office and the Department for the Protection of Society and State Interests of the National Police of Ukraine.

The lawyer is suspected of deliberately beating a journalist because of their professional activities (Part 2 of Article 345-1 of the Criminal Code of Ukraine).

According to the investigation, the "Skhemy" cameraman had been filming the premises of the village council in Chabany, Kyiv region. The lawyer attacked the cameraman and hit the video camera, breaking it. Having examined Borys Trostenko, doctors diagnosed him with a possible concussion.

The issue of choosing a measure of restraint is currently being resolved.

As IMI reported, on March 6, 2019, while filming in Chabany village, Kyiv region, the filming crew of the "Skhemy: Corruption in Detail" program, consisting of journalist Kateryna Kaplyuk and cameraman Borys Trotsenko, was attacked. The incident took place at the Chabany village council. The man injured the cameraman and broke the video camera. After the examination at the hospital, doctors diagnosed Borys Trotsenko with a concussion.

In July 2020, the police dropped the case for the obstruction of the work of "Skhemy" journalists. They were attacked in the spring of 2019 in the village of Chabany in the Kyiv region during the filming of a story about the allocation of state land managed by the National Academy of Agrarian Sciences of Ukraine to private owners. The police stated that reason for dropping the case was "the expiration of the pre-trial investigation period." "Skhemy's" lawyers were going to contest the decision. Subsequently, on May 31, 2021, proceedings were opened on the grounds of a criminal offense under Part 2 of Art. 345-1 of the Criminal Code of Ukraine.