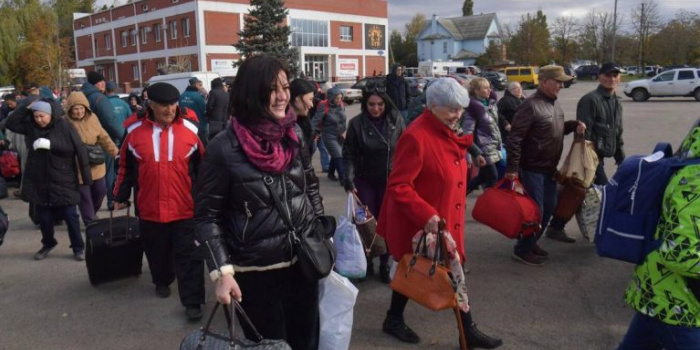 The so-called "evacuation" from the right-bank part of Kherson oblast, announced by the Russian occupiers, resembles a propaganda show whose organizers gave little thought to the people at all and left them to their own devices. Namely, in the occupied Crimea.

The propagandists themselves begin to admit this, writes the Kherson publication "Most".

For example, the pro-Russian Telegram channel "News from Kherson Oblast" made a post quoting a letter Kherson residents who left for Yevpatoria because they had previously sent a child there "on vacation". 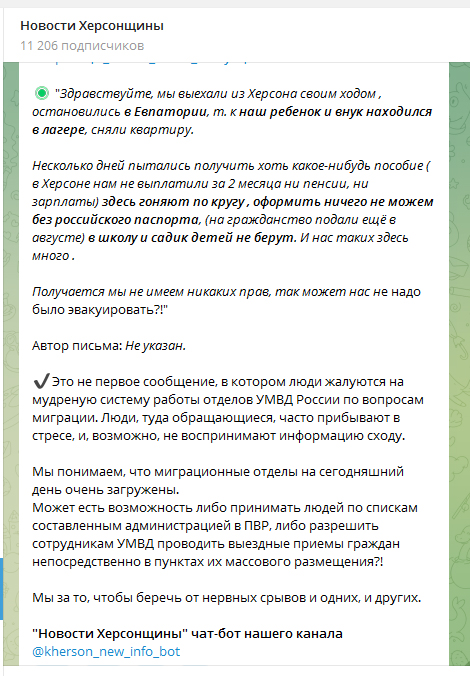 "Most" journalists point out what is clear from the message: the authors of the letter probably support Russia's armed aggression against Ukraine, seeing as they applied for citizenship of the aggressor country back in August, but still have not received their passports.

"This story is revealing in that, firstly, it is yet another evidence that the occupiers' slogan 'We do not abandon our own' is empty nonsense, and in fact abandoning 'our own' is the Russians' national game. And secondly, this story demonstrates that the so-called 'evacuation' announced by the occupiers is nothing more than a shameful propaganda farce. People (mostly those loyal to Russia) who left for Crimea without Russian passports were not given much thought," the journalists write.

Also, according to the publication, people who applied for Russian passports in Kherson and then left for "evacuation" have to wait until they receive the documents, either in apartments they rent out with their own money (if they have it), or in temporary accommodation centers.

"The latter are a kind of 'almshouses' with an abundance of frankly low-life folks and conditions similar to what a Russian literary classic once described: 'Eat what you're given,'" the journalists write, describing the life in the temporary accommodation centers.

As IMI reported, the Russians are stealing telecom towers from the temporarily occupied territories of Kherson oblast and taking them away to the occupied areas of Donetsk oblast.