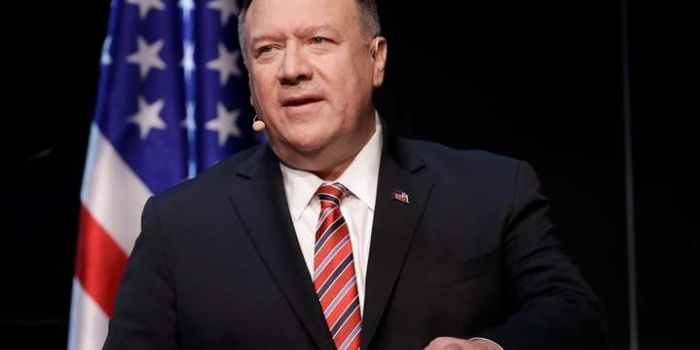 Ahead of a visit to Kyiv, U.S. Secretary of State Mike Pompeo has accused a journalist from National Public Radio (NPR) of lying after she published critical fragments of their conversation concerning Ukraine that eventually went viral, as Radio Free Europe/Radio Liberty reported.

NPR's Mary Louise Kelly, the host of All Things Considered, said on January 24 that Pompeo got angry and ended an interview when she asked him questions about why he didn't defend former U.S. Ambassador to Ukraine Marie Yovanovitch, who was fired by President Donald Trump last year.

According to Kelly, she was then asked to go into Pompeo's private living room to continue the conversation but told not to bring her recording equipment. Kelly said that Pompeo yelled and used foul language as he said: “Do you think Americans care about Ukraine?”

“He used the F-word in that sentence and many others,” Kelly said.

She said that he then ordered assistants to bring out an unmarked world map and asked her to locate Ukraine, which she said she accurately did. Kelly has a master's degree in European Studies from Cambridge.

Kelly said she was never told that the conversation in the living room was off the record.

Her description of their interaction went viral on Twitter on January 24, just a few days before Pompeo heads to Kyiv on January 30 for his first official visit to Ukraine since taking office in 2018.

Amid the media uproar over Kelly's account of their meeting, Pompeo shot back the following day in a public statement.

"NPR reporter Mary Louise Kelly lied to me, twice. First, last month, in setting up our interview and, then again yesterday, in agreeing to have our post-interview conversation off the record," Pompeo said.

Pompeo claimed it was "another example" of the media seeking to hurt Trump. However, he did not deny her description of his comments.

The secretary's statement ended with the sentence "it is worth noting that Bangladesh is NOT Ukraine," which seemed to imply that he is claiming that Kelly picked out the South Asian country on the unmarked map instead of Ukraine.

NPR issued a response to Pompeo's statement, calling Kelly a reporter with "utmost integrity" and said it stood behind her report.

The Committee to Protect Journalists also issued a statement later on January 25 criticizing Pompeo, saying his reaction was another sign of the Trump administration's "hostility" toward the press.

"These verbal attacks undermine efforts to protect journalists and erode U.S. standing as a beacon of press freedom," the committee said.

Yovanovitch, a career Foreign Service officer who had served as ambassador to three countries, was asked by the State Department to extend her term in Ukraine.

However, she was then subject to a smear campaign by Trump allies who accused her of impeding an investigation into his political rival's work in Ukraine. During a phone call with Ukrainian President Volodymyr Zelenskiy, Trump called Yovanovitch "bad news."

Pompeo, Yovanovitch's boss, has avoided answering questions about why he did not publicly defend her reputation amid the smear campaign.

The U.S. Senate is currently conducting a trial after the Democratic-controlled House of Representatives impeached Trump last month on two articles -- abuse of power and obstruction of Congress.

The Democrats have accused Trump of withholding military aid and a White House invitation as a means to pressure Zelenskiy to launch two investigations that would benefit the U.S. leader’s reelection chances.

Trump dismisses the accusations as a witch hunt and has said his dealings with Zelenskiy were "perfect."