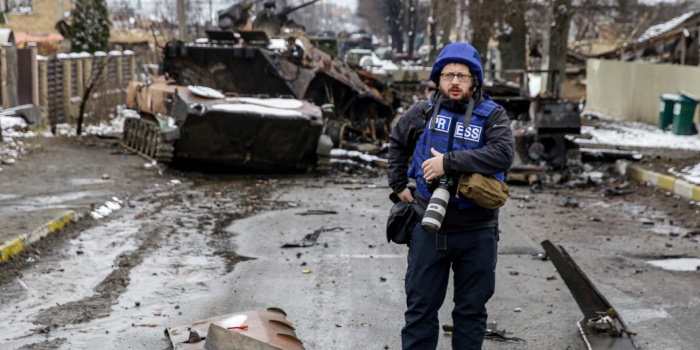 An exhibition of photos of Ukrainian journalists during the war #OntheFrontlinesofTruth is to open on September 16 at 10:00 a.m. at the Vilnius railway station (Lithuania).

The exhibition shows the crimes committed by the Russian Federation against the media and journalists, and also pays tribute to Ukrainian journalists who are working in extremely dangerous conditions.

The photo exhibition will present 30 photos of journalists working in Ukraine's many corners where hostilities have been ongoing since the beginning of the full-scale Russian invasion of Ukraine.

The exhibition was organized by NGO Institute of Mass Information (IMI) and the international organization Internews with the support of Lietuvos Spaudos Fotografų Klubas.

This is the second exhibition of photographic content. The first one was organized in June in Strasbourg (France) by the Institute of Mass Information, the Permanent Mission of Ukraine to the Council of Europe, the Ukrainian delegation to the Parliamentary Assembly of the Council of Europe, and PromoUkraïna.

The purpose of the exhibition is to draw attention to the crimes committed by the Russian Federation against the media and journalists, as well as to show the extremely dangerous conditions that journalists in Ukraine are working in.