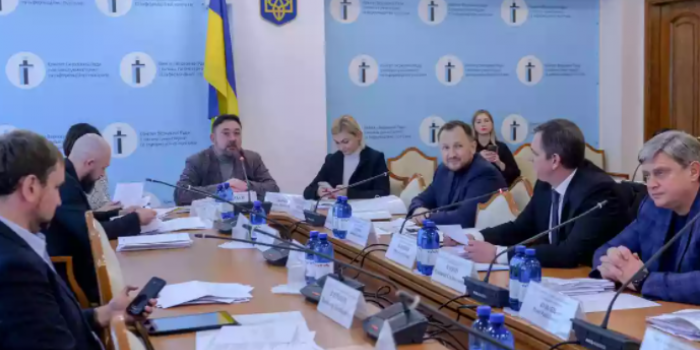 The Verkhovna Rada Committee on Humanitarian and Information Policy instructed its chairman Mykyta Poturayev to submit a proposal to withdraw the draft law #4487 “On Amendments to the Law of Ukraine“ On Ensuring the Rights and Freedoms of Internally Displaced Persons ” which is supposed to repurpose TV channel Dom. The members of the committee referred to meaningfulness and tenability of changes to the media legislation, as well as compliance of the above amendments with the requirements of the Rules of Procedure of the Verkhovna Rada.

Thus, by a majority of votes, the members of the committee supported the initiative of the MP Volodymyr Vyatrovych, as Detector Media reported.

“Due to the fact that while preparing the draft law 4487 "On Amendments to the Law of Ukraine" On Ensuring the Rights and Freedoms of Internally Displaced Persons " for the second reading the Committee of the Verkhovna Rada of Ukraine on Human Rights, Deoccupation and Reintegration Donetsk, Luhansk regions and the Autonomous Republic of Crimea, the city of Sevastopol, national minorities and interethnic relations took into account amendments №119 and 120, which did not relate to the regulation of this bill and make fundamental changes to the Laws of Ukraine "On Television and Radio Broadcasting" and Of Ukraine ”, which hadn’t been considered by the profile committee on humanitarian and information policy, one should instruct the Chairman of the Committee Mykyta Poturayev to immediately address the Chairman of the Verkhovna Rada of Ukraine with a proposal to withdraw Bill #4487 from consideration in plenary sittings of the Verkhovna Rada(…), ”Volodymyr Vyatrovych said..

It will be recalled that on December 15, the Parliamentary Committee on Human Rights recommended to adopt a draft of amendments to the Law of Ukraine “On Ensuring the Rights and Freedoms of Internally Displaced Persons” ( #4487 ), submitted by People's Deputy Dmytro Lubinets (For the Future) for the second reading.

If the parliament supports the amendments, the TV channel can get into the Universal Program Service, which is provided free of charge to Ukrainians. Currently, the UPP includes Suspilne and Rada TV channels.

Thus, the state-run Russian-language channel Dom, which was set up to broadcast to the temporarily occupied territories, is de facto gaining national scale and will be able to compete with private TV channels.

As IMI reported, the Verkhovna Rada is going to consider the bill #4487 "On ensuring the rights and freedoms of internally displaced persons." Once  adopted, the document will give the state-run Russian-language channel Dom, which was set up to broadcast to the temporarily occupied territories, the national status.

The Media Movement has opposed the strengthening and reorientation of state media (including the Dom and Rada TV channels), which have recently taken place at the behest of the president, his team and the Servant of the People parliamentary faction.