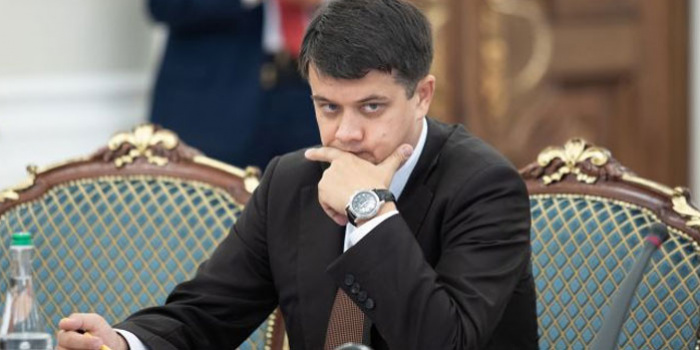 The Chairman of Verkhovna Rada Dmytro Razumkov said that he had not been contacted about the issue of underfunding of the Crimean Tatar ATR TV channel. Razukkov told it at the press briefing on January 22, as he was on working trip to the Kherson region, as Ukrinform reported.

“In the Verkhovna Rada, I guess we hold a good enough dialogue, we have representatives of the Majlis in the parliament. They did not address me with such a question, "- the Chairman of Verkhovna Rada told.

So, Razumkov added it was difficult for him to comment on the situation with the Crimean Tatar channel ATR.

It should be reminded that ATR owner Lenur Islyamov said in an interview to Detector Media that 45% of the staff had to be reduced due to underfunding from the state budget to ATR.

In the second half of 2019, ATR did not receive 15 million UAH from the state budget ($617 thousand). The channel has been receiving financial support from the state budget since 2016 through the budget program of resettlement and arrangement of Crimean Tatars and persons of other nationalities deported from the territory of Ukraine.

“This year, like last year, we are promised to get funding of 50 million. Last year we received 35 million, but 15 million were short-received. Now we are promised again 50 million, but we have not seen them yet and do not know, how they will be allocated… In the past, the state has supported us, even in the toughest of times. Now, we are told that we are not in the protected budget items. But we had submitted documents for funding and we counted upon this money! We were assured that these funds would come, ” Islamov said.

Asked what was the reason for underfunding and how to fix it, the ATR owner replied: “It is unclear now who makes decisions at the state level. I don't think the authorities are doing this intentionally. But I think that law-skilled managers have come to administrate the structures involved in financing. They do not understand what are the priorities. <...> Neither us, nor the Majlis now have any direct contacts with the current authorities, ” Lenur Islamov said.

ATR is the first Crimean Tatar channel. On March 31, 2015, he ceased broadcasting due to the non-issuance of a license by the provisional Russian occupying power. On the evening of June 17, 2015, the channel resumed broadcasting from Kyiv.

IMI reported, due to underfunding, ATR TV channel has reduced 45% of its staff. ATR owner Lenur Islamov told it interviewed by Detektor Media.

About 40 persons have been fired, journalists, film directors and others. News editions have been also cut and live broadcasts have been suspended. Islamov added that the channel was on the verge of closing.

“Due to shortage of funding, we had to reduce not only the number of news editions, but also live (live) broadcasts from Crimea. We had to recall four journalists who worked in Crimea. We have now suspended the production of all the programs we were making from Crimea. We just cannot afford it, ” Islamov said.