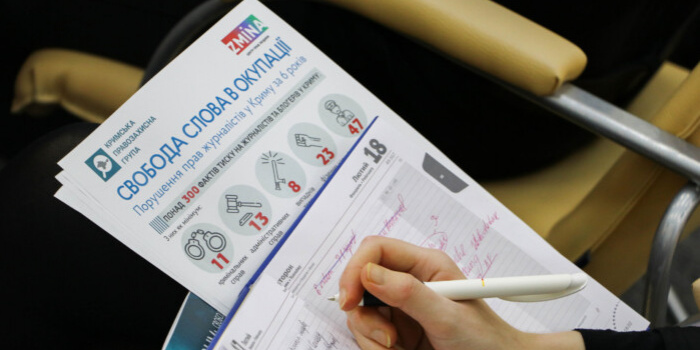 From the end of February 2014 to September 2019, the human rights defenders reported more than  300 violations of journalists' rights in occupied Crimea.These are the figures from the information-analytical report prepared by the experts of the ZMINA Human Rights Center and the Crimean Human Rights Group, as ZMINA reported.

The large-scale process of crackdown on freedom of speech on the peninsula is underway, in particular, by means of:

According to the researcher of the Crimean human rights group Iryna Sedova, the largest number of violations occurred in March 2014 - during the armed occupation.

“During this period of time, the journalists from all over the world worked in Crimea. From February 26 to March 22, 2014, more than 100 cases of violations of the rights of journalists and bloggers were recorded, ”she explained.

Journalists and bloggers who disagreed with the occupation were victims of criminal and administrative persecution. Among them are Crimean Tatar citizen journalists who have been imprisoned for their coverage of politically motivated processes against Muslims. Four individuals were prosecuted through publications claiming that Crimea belonged to Ukraine. There is information of a total of at least 10 criminal cases, all of which are indicative of politically motivated persecution for freedom of expression.

In addition, the occupation authority opened 13 administrative cases to punish dissidents. This is the administration of three to ten days and fines ranging from 500 to 15,000 rubles. Iryna Sedova also reported that at least 47 cases of arbitrary detention were known at the time of publication of the report.

The journalist Taras Ibrahimov, who was recently banned from entering the peninsula for 34 years, said that he had also been detained in Crimea while performing his professional duties.

In nearly six years of monitoring, the human rights activists have registered more than 80 cases of complete bans on photo and video recording and at least eight cases of denial of access to public information.

According to investigative journalist Tatyana Rikhtun, the measures taken by the occupying authorities in Crimea have been translated in destruction of pluralism of thoughts and the actual substitution of independent media by sources of Russian propaganda.

The journalist reported that during the last several years, human rights defenders have been systematically recording illegal blocking of ​​Ukrainian online media and FM radio stations in Crimea.

“These discriminatory practices made it impossible for Crimeans to receive information about Ukraine and human rights violations in Crimea. The Kremlin-controlled Russian media hide most of these facts from the inhabitants of the peninsula, ”Rikhtun explained.

“We recommend that the governments of foreign countries continue to exert pressure on the authorities of the Russian Federation in order to stop the persecution of independent journalists and bloggers; to set free all Ukrainian political prisoners in Crimea and Russia; to immediately cease the application of Russian legislation in the temporarily occupied territory of Crimea; to allow Ukrainian journalists to enter Crimea without restrictions; to stop fomenting hate speech in mass media, ”the human rights activist said.

Tetyana Pechonchyk also informed that the government of Ukraine can take its effect onto the situation with free speech in Crimea, if it fulfills the following recommendations: