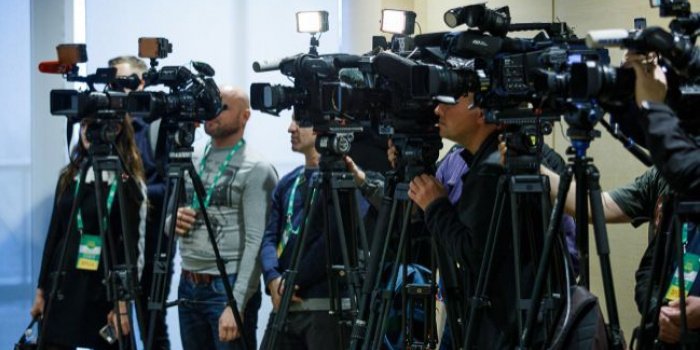 A journalist from the online publication "Zhytomyr.Info" Valeriya Volodina said that only TV channels were invited to cover the event.

"Very interesting. The head of the regional state administration Vitaliy Bunechko is to give a press conference, but how should mass media find out he would? You call the press secretary Yuriy Melnyk, and they tell you: "We decided to invite only TV channels." It turns out to be very easy, ”the journalist wrote on her Facebook page.

Later, in a comment to IMI's representative in the Zhytomyr region, Volodina explained that she had learned about the meeting from her colleagues TV presenters and she was so outraged by such selectivity.

Other journalists shared their comments under the post of Valeria Volodina.

"They say that there will be a separate press conference for online media next week. But what is the idea to split mass media? I agree that they should announce the meetings, because I learned about this press conference not from the website of the regional state administration, but from your post, ”journalist Iryna Chyrytsya wrote.

“Now they will say all this means not to make crowds. It's good that everything can be justified with the coronavirus, ” journalist Iryna Kyrylovych commented it on. 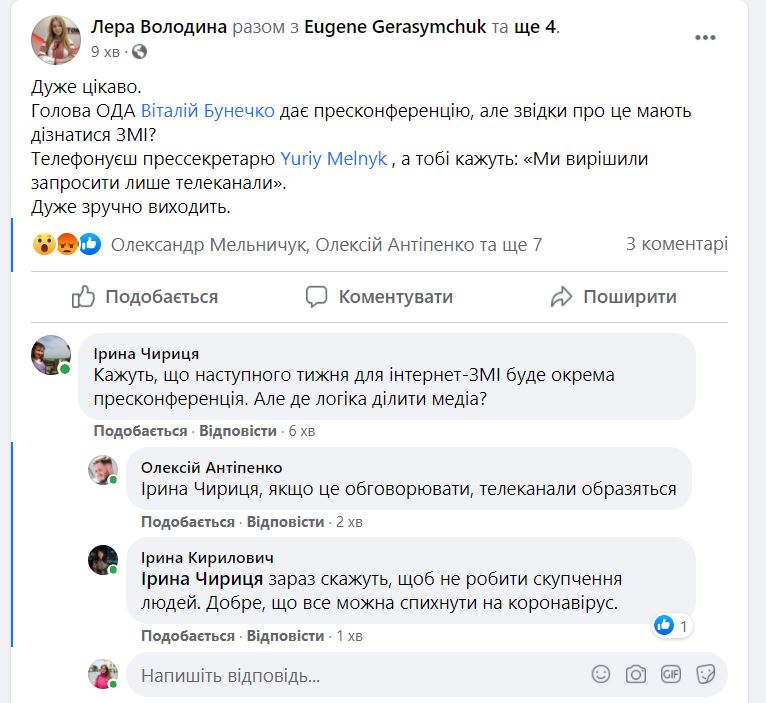 Commenting it on to the representative of IMI in Zhytomyr region, the press secretary of the head of the regional state administration Yuriy Melnyk explained such selectivity with the COVID pandemic, but he noted that now they planned to change the format of the event and invite a wider circle of journalists.

According to him, a separate press conference of the head of the regional state administration was planned regarding the achievements and defeats of 2020 exclusively for TV channels.

“During this week, we also were going to announce that online media will be gathered separately, according to our list, it is about 12 media outlets. Everything is quite simple, because we now have COVID. Even one or two representatives from each of these media outlets is also a big crowd. We understand that we need to be more careful, and we wanted to split the event into two days. We have previously talked to Vitaliy Ivanovych about this, and during the day we will decide how to meet the request for information of all journalists: not to divide into several days, but to do everything in one day respecting the distance, ”Melnyk explained.

He also noted that initially the press conference was scheduled to be held in the office of the head of the regional state administration, now the issue is being resolved to move the venue, but the number of journalists will still be limited.

“Due to the quarantine restrictions of the Cabinet of Ministers, we cannot gather more than 20 people in the hall. In the near future we will announce it and start accreditation. We will try to let all willing journalists in, but we will immediately warn that the number will be limited, ”the spokesman said.

We will remind, in October, 2019 journalists of "Zhytomyr.Info" also complained that representatives of their edition weren't invited to a press briefing of the chairman of the Zhytomyr regional state administration Vitaly Bunechko.