On December 21: online presentation of new book by Stanislav Aseyev 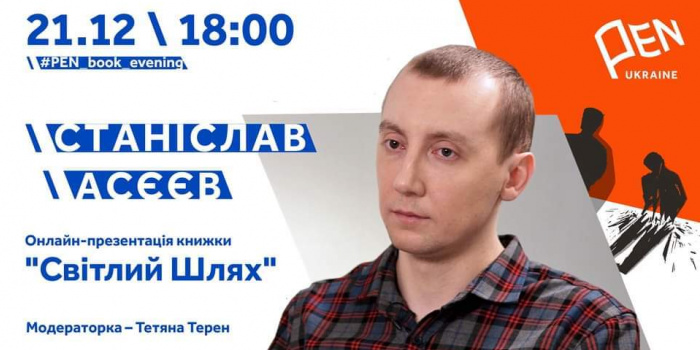 On December 21, at 6:00, Stanislav Aseyev to present online his new book "Path of Light: The Story of a Concentration Camp" (Staryi Lev Publishing House). The meeting will be moderated by Tetyana Teren, a journalist and executive director of PEN Ukraine. During the presentation, viewers will ask questions to the author in the broadcast comments.

In the book "Path of Light" Stanislav Aseyev spoke of his captivity by pro-Russian forces in occupied Donetsk, where he was caught on fabricated charges of "espionage" in May 2017 and was set free on December 29, 2019 as part of a swap of prisoners. The book revealed the blunt truth about the captivity, where the bright line of human feelings got fading, about Intense life in the next street, about tortures that become ordinary thing and about human cruelty that knew no bounds. The story written by Stanislav Aseyev shocks not only in its content: the facts described by the author took place very close by - in the basements of occupied Donetsk nowadays. The book is bilingual: under one cover the reader will find texts in Ukrainian (translated by Victoria Stakh) and in the original language - Russian.

For more details, please, go to the link

As IMI reported, on December 10, Stanislav Aseev presented a new book “Path of Light. The story of a concentration camp ”.

He said that another former prisoner of the militia men, tanker Bohdan Pantyushenko, had helped him to send his texts from captivity to the outside.